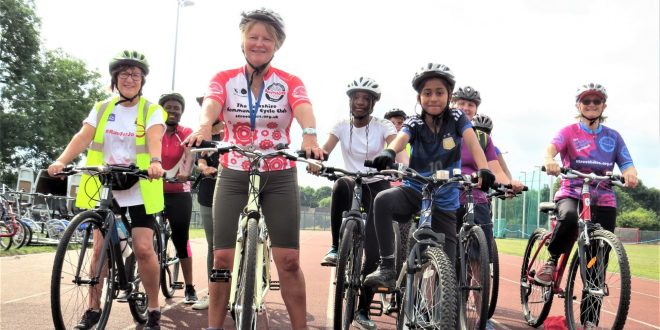 Gill Greaves, (centre front) with some of the Women’s Riding group at Streetbikes

Huddersfield’s Streetbikes has recycled over 13,000 bikes since launching in 2010, bikes that have then gone on to be used by or given to Kirklees residents.

The charity has estimated that around 80% of those bikes are collected from three of Kirklees Council’s Household Waste Recycling Centres, where residents have taken broken or no longer needed cycles.

Gill Greaves is one of the founding members of Streetbikes and says she is ‘constantly amazed’ at what the charity has been able to achieve through recycling.

She said: “We had a mad idea to set up a community cycling organisation and ended up giving birth to this amazing adventure that has seen literally thousands of people learn to ride, keep fit, socialise and make friends while cycling – we have had people tell us it has changed their lives.”

The charity has grown to now have approaching 20 volunteers and nine part/full-time staff. Gill said: “Each week our women’s only group meets up to ride along the Calder Greenway. They come from every part of our community and love the sense of security we offer.

“Besides keeping fit, they build self-confidence and engage with others they would not normally meet. It’s not just the physical fitness that is improved either, they tell us how their mental health feels better. We have loads of people of all abilities come down on a Saturday for our family cycle rides on the track, it really is like one big family day out and thanks to donations of specialist bikes, we can cater for all abilities, including those in wheelchairs.”

Dave Greaves is a senior mechanic for Streetbikes. His role is to keep the five shipping containers of bikes the charity has running smoothly, and when he’s not in Spenborough he’s up at the charity’s recycling depot at Milnsbridge. That is where the bikes get taken apart for spares and where the bike mechanics courses are taught by him and other volunteers.

“It was never our intention to see it get this big, but it is amazing to see it grow and have such an impact on people,” he said. “We now have young offenders and those with learning difficulties on our mechanical courses. We give people the opportunity to develop, to feel good about themselves and that is all down to those thousands of bikes being collected and recycled by Kirklees Council – we certainly could not do it without the support it has given us over the years.”

As well as providing bikes for people to use at its organised rides, Streetbikes sells them at discounted rates to people on lower incomes and if needed, they will give them away so that people can get to work, study, or simply exercise. Children can also trade up their bikes as they grow. The charity also visits schools and other groups to talk about road safety and cycle maintenance and how to deal with a breakdown while cycling.

Read more: ‘Our model is based on repair, service and sale’: Platt Fields Bike Hub’s Andy Boardman on the community bike workshop

Councillor Naheed Mather, cabinet member for environment, said: “Streetbikes is an inspiring story of success built on recycling supposedly waste items. It is quite astounding to see the significant impact the charity is having right across Kirklees.

“This charity is playing a vital role by giving people on low economies free transport during the current cost-of-living crisis and we must not overlook the health benefits they are gaining each time a Streetbikes cycle is used. More people cycling means less vehicles pumping out fumes, less congestion on the roads and subsequent improvements in our air quality.

“The way Streetbikes changes so many lives on so many levels through the reuse of waste materials is something that Kirklees Council is proud to be associated with and will continue to support. We believe that waste should be seen as a resource, and if anything proves our case, it is Streetbikes.”

Old or unwanted bikes can be left at Emerald Street, Huddersfield and Bent Ley Road, Meltham Household Waste Recycling Centres where they are placed in secure containers.