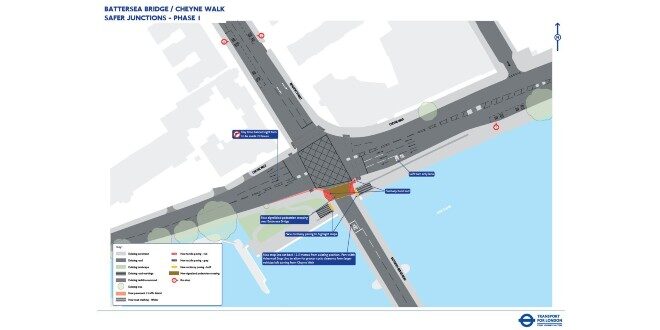 TfL to start work to improve safety at Battersea Bridge

TfL is starting work tomorrow, Thursday 21st October, to make crossing Battersea Bridge safer, as part of its work to improve road safety in the area in line with its Vision Zero goal of eliminating death and serious injury on the road network.

The work will include a new signalised pedestrian crossing on the north side of the bridge, making it safer and easier for people to cross it. Work was brought forward following the death of Jack Ryan, who was tragically killed on the bridge earlier this year, following a collision with a vehicle.

TfL will also expand the pavement on both sides of the road, add tactile paving and enforce the existing banned right turn from Cheyne Walk into Battersea Bridge Road, 24 hours a day. The speed limit on Chelsea Embankment will also be reduced from 30mph to 20mph. In March 2020, TfL introduced a 20mph speed limit on all of its roads within the central London congestion charging zone as part of its Vision Zero commitment to eliminate death and serious injury on the capital’s roads.

TfL is now working to lower speeds on its road network in inner and outer London, including on the inner ring road, high-risk roads and roads in town centres. In July, TfL set out the next stage of its plans to make its roads in Westminster safer, which would see speed limits on almost all TfL roads in the borough reduced to 20mph.

After the new crossing over the southern arm of the junction is installed, TfL is proposing to add more pedestrian crossings at the junction and look at how to reduce road danger for people cycling. TfL is continuing to work with the Royal Borough of Kensington and Chelsea and other stakeholders to agree these and plans to hold a full public consultation on the proposals in 2022. Safety improvements are also planned at the southern end of the bridge and TfL will continue to work closely with Wandsworth Council on these. 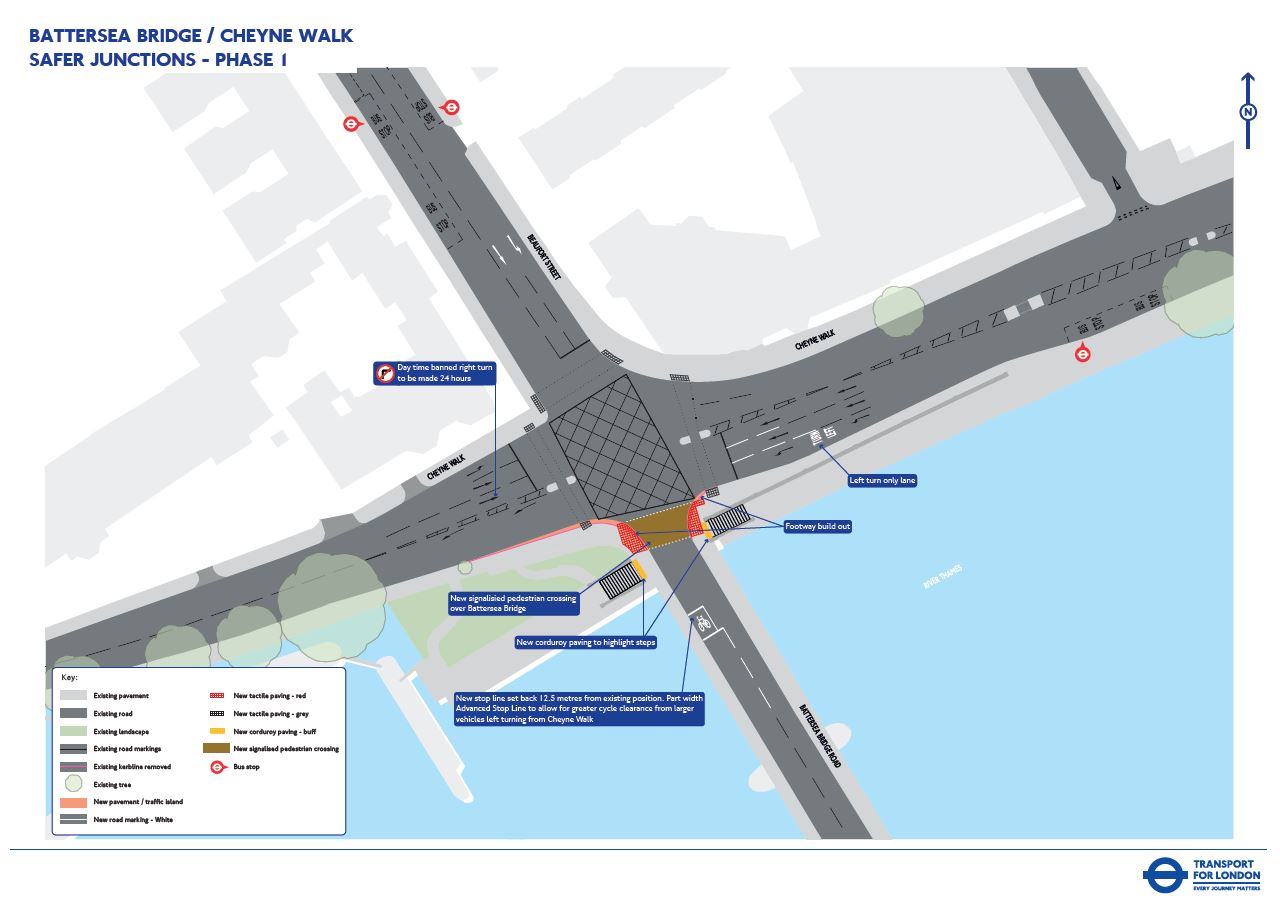 Will Norman, London’s walking and cycling commissioner, said: “The safety of all road users and pedestrians in London is paramount. Following the tragic death of Jack Ryan on Battersea Bridge earlier this year, we’ve worked closely with road safety campaigners and the Royal Borough of Kensington and Chelsea to accelerate safety improvements at this busy junction.

“The new signalised pedestrian crossing, along with expanded pavement and a reduced speed limit on Chelsea Embankment, will make crossing the bridge and travelling around the area safer for pedestrians. We will continue to work with the council and other partners to further improve safety in this area, including high-quality cycling routes, as part of our Vision Zero commitment to eliminate death and serious injury from London’s roads.”

Nick Fairholme, TfL’s director of project and programme delivery, added: “Making London’s streets safer is a top priority for TfL. Any death or serious injury on our streets is one too many and we are absolutely committed to making the capital’s roads safer for everyone.

“I would like to thank local safety campaigners and the local community for working with us to develop these proposals. We will continue to work closely with the Royal Borough of Kensington and Chelsea and other partners on further safety improvements within the area, as part of our Vision Zero commitment to eliminate death and serious injury on London’s transport network.”

Councillor Johnny Thalassites, lead member for environment, planning and place at Kensington and Chelsea Council, said: “It’s a relief that Battersea Bridge will be made safer for pedestrians with this much-needed crossing. The voices of local people were hugely influential in getting this done and we’ve been behind our residents every step of the way.

TfL’s Direct Vision Standard, which reduces lethal blind spots on lorries. The scheme requires owners of Heavy Good Vehicles (HGVs) weighing more than 12 tonnes to apply for a free permit that assigns vehicles a star rating based on how much the driver can see directly through their cab windows in order to be able to drive in London.