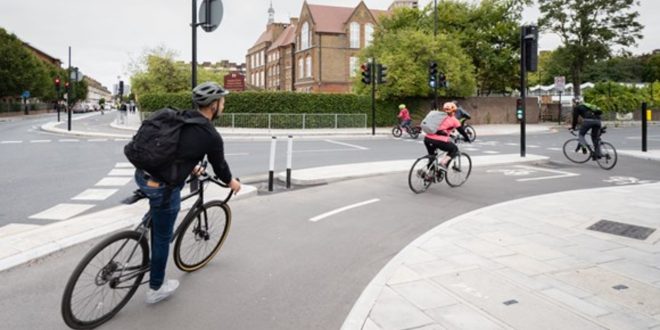 Transport for London (TfL) and Lewisham Council have opened a new section of cycleway on Evelyn Street in Deptford.

The remaining section of Cycleway 4 between Greenwich and central London, on Lower Road, is planned to start construction later in 2022 following TfL’s recent funding settlement with the Government.

Will Norman, London’s walking and cycling commissioner, said: “In the last two years, we’ve seen more Londoners than ever choosing to walk and cycle around the capital. We are determined to maintain this success and encourage more people to pick up greener and more sustainable transport options by continuing to make London’s roads safer and journeys easier.

“I’m delighted that this latest section of Cycleway 4 is now completed, enabling an important and safer cycling route for local communities between Greenwich and Central London. The Mayor and I are determined to continue building a cleaner, greener London for everyone and now that we have secured funding, we’ll start the work on the remaining Lower Road section as soon as we can.”

The route has previously been extended in both the east and the west, using experimental changes and plastic wands. TfL recently announced that the experimental changes extending the route along Tooley Street towards London Bridge will be kept permanently, with the number of people cycling on the route increasing by more than 25%.

Experimental changes were also brought in between Greenwich and Woolwich, using wands to protect people cycling from motor traffic along a route that includes the Angerstein Roundabout, where a man was tragically killed cycling in 2018. TfL continues to engage with local communities about these changes, with feedback being used alongside monitoring data to support a decision on the scheme’s future.

Nick Fairholme, TfL’s director of project and programme delivery, said: “Walking and cycling are vital to London’s transport network and this new section of Cycleway 4 in Deptford will ensure that even more people have access to the capital’s network of high-quality routes. We’d like to thank people in the area for their patience during construction work and will continue to work with local councils to ensure that everyone can walk and cycle safely.”

Read more: Open to everybody: How Bikeability gives children the skills and confidence to get on their bikes

Councillor Louise Krupski, Lewisham Council’s cabinet member for environment and climate action, said: “This new section of Cycleway 4 will make it safer and easier for our residents to access London’s extensive network of cycling routes, encouraging more people in Lewisham to cycle around the borough and across the capital.

“I look forward to continuing working with Transport for London to improve cycling infrastructure in Lewisham and increase the number of cycle journeys, as part of our work to create a more sustainable transport network and improve air quality.”

Previous October edition of BikeBiz magazine now available
Next Open to everybody: How Bikeability gives children the skills and confidence to get on their bikes