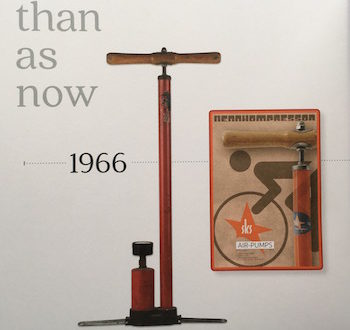 German brand SKS has produced a limited-edition 58-page hardback book to celebrate the fiftieth anniversary of its Rennkompressor track – or floor – pump.

SKS was founded in 1921 by Karl Scheffer-Klute as a manufacturer of curtain rods. The company diversified into bicycle tyre inflators in 1932. The Rennkompressor track pump was developed in 1966 by Walter Scheffer, factory director of SKS. Renn is German for "race" – the "race compressor" pump was produced by SKS for the burgeoning professional race bike scene of the 1960s.

Billed by SKS as the "father of all fllor pumps" the Rennkompressor is a true classic, and there’s a red-barreled fiftieth anniversary version of the pump.

The lavishly-produced celebratory book contains photographs of the pump through the years as well as close-ups of the pump’s thirty individual parts, including the pressure meter.