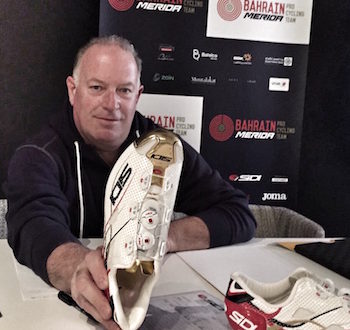 Italian cycle clothing company Sidi has produced a special edition of its Shot cycling shoe for Vicenzo Nibali and his team mates on the new Bahrain Merida pro cycling team.

The team was presented earlier today in Manama, the capital of Bahrain in the Persian Gulf. Prince Nasser bin Hamad Al Khalifa of Bahrain was guest of honour at the official team presentation.

The new World Tour team is led by "Nibbles".

The special edition shoe features team graphics and colours – the red and white represent the Bahraini national flag; blue represents the two seas that surround the nation, and the golden flourishes represent royalty.

Nibbles – also known as "the shark" which, it has to be admitted, is rather scarier than Nibbles – has been riding in Sidi shoes for some years.

Sidi is still owned by Dino Signori, who founded the brand in 1960.