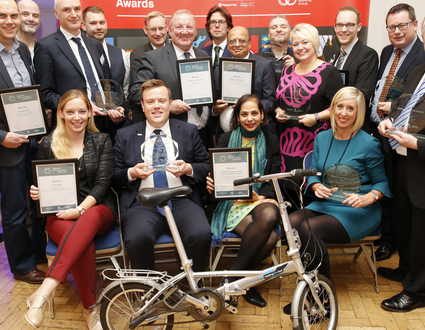 The awards, which are now in their 13th year, honour those who the organisers deem to have supported the relationship between rail services and cycling. According to research conducted by the Rail Delivery Group, around 50million ‘cycle-rail’ journeys took place last year, up 40 per cent on 2010.

The research also claims that the number of cycle spaces at rail stations has risen to over 75,000 from 23,500, while the number of cycle-rail journeys where a bike is parked at a station has increased by over 70 per cent in the last seven years, with almost 1,000 hire bikes available and 35 cycle hubs.

This year’s winners, judged in tandem with cycling stakeholders and campaign groups, include:

Presenting the awards was Rupert Furness, head of active and accessible travel at the Department for Transport, at a ceremony hosted by RDG and sponsored by Cyclepods.

Chief executive at the Rail Delivery Group Paul Plummer said: “Record numbers of people are using cycles as part of their rail journeys and this growth is down to the dedication and determination of our partnership railway, both inside and outside the rail industry.

“This year’s awards winners have made outstanding contributions to cycle-rail covering everything from new and improved station facilities to better customer information and customer service, with Britain’s communities better connected through localised decision-making and investment.”