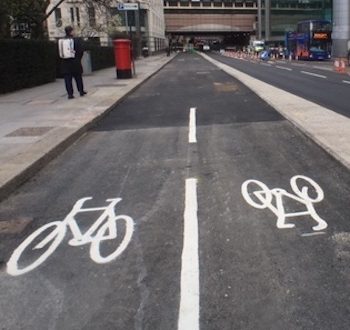 A Freedom of Information request from a questionner hoping to show that the building of a Cycle Superhighway in London led to increased congestion has resulted in the opposite. Transport for London replied that some of the capital’s protected cycleways are "moving five times more people per square metre than the main carriageway."

And if getting more people on bikes is keeping people out of cars then the cycleway in question is clearly a great success.

Cycle usage has grown massively in London since the introduction of the congestion charge in 2003 – on the current trajectory, cycle use in central London during the morning peak will soon overtake use of private motor vehicles – and Transport for London expects this growth to continue. TfL’s new business plan for 2017–2023 estimates that cycle use will grow by another 45 percent.

Note: the above pic of the cycleway on Upper Thames Street was taken during construction and before it officially opened