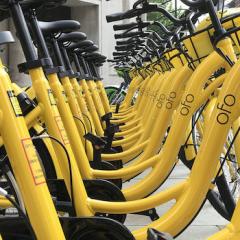 ofo on Mobike: ‘We welcome the competition’

Ofo has commented on the recent release of 200 dockless bikes by Mobike in Islington.

The move marks the progression of Mobike’s aim to have a presence in every major UK city, following a community-backed luanch in Manchester in June and further releases in Newcastle and Oxford.

Dockless bike share firm ofo launched in the borough of Islington in early November. Joseph Seal-Driver, general manager for ofo in the UK and Ireland commented on the mounting competition: "We welcome competition in Islington, just as we did in Oxford when Mobike launched there several months after us. It’s healthy and ultimately benefits the public.

"Our product stands out in the industry as an example of how dockless schemes should be run. We’re the original, the oldest, and have therefore had longer than anyone else to refine our service, our bikes and our app. Our three-speed bikes are light, nimble and fun to ride and our app makes finding and hiring them simple."

Commenting on the launch, Mobike UK general manager Steve Pyer said: “Islington is an important milestone in growing our presence in London. Islington is a stylish, energetic, multi-generational borough – and already has a strong cycling culture. Working with forward-thinking local authorities, such as Islington is an essential part of the way we operate, as we believe strong relationships with public transport organisations, council representatives, mayoral teams and other city stakeholders is vital to the success of bikesharing.”

Mobikes announced a nationwide partnership with British Cycling earlier this year, with the goal of getting two million more people on bikes in UK by 2020.