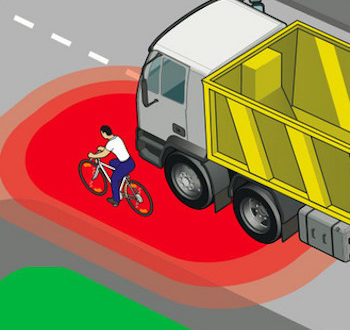 Transport for London is to cut the number of unsafe lorries on the capital’s roads. Thousands of lorries could be banned to make the roads safer for cyclists and pedestrians. London Mayor Sadiq Khan proposes a star system for HGVs with the 35,000 zero-rated HGVs currently operating in London to be banned by 2020.

"I’m not prepared to stand by and let dangerous lorries continue to cause further heartbreak and tragedy on London’s roads," said Khan.

"The evidence is clear – HGVs have been directly involved in over half of cycling fatalities over the last two years, and we must take bold action to make our roads safer for both cyclists and pedestrians."

“Pedestrians, cyclists and drivers and operators of HGVs all stand to gain if modern designs with minimal blind spots become the norm for on-street use – no one wants fatalities and life-changing injuries to continue to happen.”

According to TfL, 18 percent of the lorries on London streets are "zero rated" by its new "direct vision" standards, and that those lorries account for 70 percent of fatal collisions with cyclists.

"The dominance of lorries with severely restricted vision in casualty statistics is a concern for every Londoner," said LCC.

"Reducing the number of lorries with significant blind spots, on our narrow urban roads, especially HGVs designed specifically for off-road use, will make streets safer for everyone and needs to happen as fast as possible. TfL and the Mayor can do even better than the timetable announced, by only procuring grade five, best-in-class lorries, themselves, for on-street use, by 2024."

Leon Daniels, Managing Director of Surface Transport at TfL, said: “Lorries designed in the 1970s and for use in a quarry have no place on the streets of a 21st century city.

“By helping everyone ensure they are using, contracting or buying lorries with high levels of driver direct vision, we will increase the demand and supply of such vehicles to the point where these safer trucks are the main lorry of choice in the Capital, other cities and around the world.”