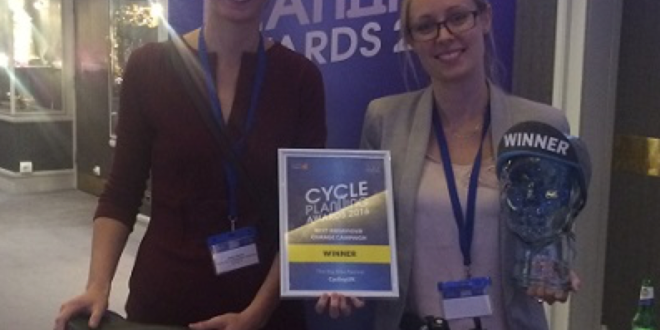 Cycling UK’s Big Bike Revival has won first prize in the Behaviour Change Campaign of the Year category of the Cycle Planning Awards 2016.

The scheme has inspired thousands of people to improve their health across England, having been granted further funding from the Department for Transport this year, and launching in Scotland for the first time this past month.

Survey data showed that over half of the people who benefited from the Bike Bike Revival last year were irregular cyclists; there were 3,500 new instances reported of cycling to work. These figures led to the scheme’s nomination for the prize, having been selected from 15 runners-up.

“We are very proud to have won this award, and delighted that the Big Bike Revival is clearly inspiring and encouraging so many people to discover, or rediscover, the gift of cycling,” said Ian Richardson, Cycling UK director of cycling. “Thanks to the project, thousands have learned how to carry out basic bike repairs, such as fixing a puncture, and how to cycle safely on and off-road. They have also been able to donate their old bikes, buy a recycled bike, and get advice about local cycle routes, clubs, and activities.”

The awards category, sponsored by Brompton Bike Hire, was one of eight in total, and was presented at the end of the Transforming London Streets Conference, and organised by Landor LINKS in partnership with Southwark Council.

Share
Previous Scotland has an obesity problem so will, er, rip out a cycleway
Next LCC reacts to mayor Sadiq Khan’s commitment to banning killer HGVs