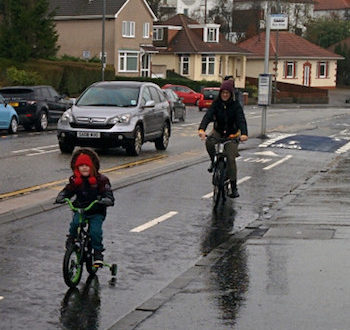 Scotland has an obesity problem so will, er, rip out a cycleway

“Scotland faces a significant challenge from rising levels of obesity,” says a hard-hitting report from the Scottish Government. The report says one of the solutions is to ”[increase] opportunities for uptake of walking, cycling and other physical activity.”

But the need to provide for active travel seems to have escaped the local and national politicians who have lined up to condemn a newly-installed separated cycleway in Glasgow. An extension to the Bears Way cycleway linking Milngavie and Bearsden, north of Glasgow, was last night voted down, and there are fears that fierce local opposition will lead to the existing one-mile route being extinguished.

The local opposition has included an anonymous threat to execute the members of East Dunbartonshire Council – “Where do we que [sic] to execute everyone here who works for EDC?”

And, on another cycleway in Ayrshire, the Daily Record reports that councillors will soon launch a bid to “rip up Holmston Road cycle lane.”

Scottish road chiefs said the Holmston Road cycleway attracts 600 cyclists a week, but that was met with guffaws at a “stormy meeting” where politicians of all stripes fell over themselves to overturn what the local newspaper unhelpfully calls a “blunder project”.

“Cross-party political figures told residents they will lead the fight to rip up the [cycle path]," reported the Daily Record.

It added: "Roads chief Stewart Turner faced an angry mob of more than 200 residents. A string of cross-party political figures, in attendance at the unique meeting, seized the moment to insist they will lead the fight to rip up the road."

Addressing the “angry crowd”, South Ayrshire’s SNP leader Allan Dorans said: “The SNP group will be lodging an official motion to get this ripped up.

“We are not making this a political issue – it is about doing the right thing and standing up for the people of South Ayrshire.”

Or, in fact, sitting down for the people of South Ayrshire because ripping out a cycleway will encourage more driving, more obesity, more foul air, more ill-health, more expenses for an already challenged NHS, believe campaigners.

Regarding the voting down of the Bears Way extension a statement from the Friends of Bear Way warned: “This vote could have a chilling effect on any ambitious cycling scheme in Scotland.”

Dear people of #milngavie and #bearsden, this is what you are campaigning against. #bearsway pic.twitter.com/bYUUbBdF43