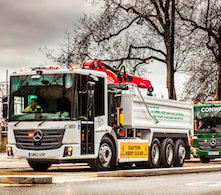 Mayor of London, Sadiq Khan, has today revealed the details of a new proposal to make the streets of the capital safer for both pedestrians and cyclists.

The groundbreaking new proposal announced this morning aims to remove most dangerous lorries from the streets of London by 2020.

The new campaign, branded the TfL Direct Vision Standard, will utilise a star-rating system to determine the risk associated with both construction and heavy goods vehicles on a scale of zero-to-five. This system will assess this scale based on the level of vision directly from the cab of the vehicle.

Under the new proposal, the majority of zero-starred vehicles deemed too dangerous will be banned from London’s roads entirely by the year 2020.

Recent data shows that HGVs were involved in 22.5 per cent of pedestrian fatalities and 58 per cent of cyclist fatalities on London’s roads in 2014 and 2015, despite only accounting for four per cent of the miles driven in the capital. Issues surrounding the restriction of driver vision have been proven to contribute to these statistics.

The latest statistics released by TfL show that around 35,000 of such zero star-rated off-road HGVs are currently operating on London roads, and that they were responsible for around 70 per cent of cyclist fatalities within the last three years.

Sadiq Khan commented: “I’m not prepared to stand by and let dangerous lorries continue to cause further heartbreak and tragedy on London’s roads. The evidence is clear – HGVs have been directly involved in over half of cycling fatalities over the last two years, and we must take bold action to make our roads safer for both cyclists and pedestrians.

“I’m determined to ensure the most dangerous zero star-rated lorries are removed from our roads completely by 2020. Our groundbreaking Direct Vision Standard will be the first of its kind in the world, directly addressing the issue of lethal driver blind-spots. I’m also proud that TfL will lead by example and will not use any zero-star lorries in its supply chain from the new financial year.”

Share
Previous Final opportunity to enter the Mavic Haute Route Rockies 2017
Next Scotland has an obesity problem so will, er, rip out a cycleway