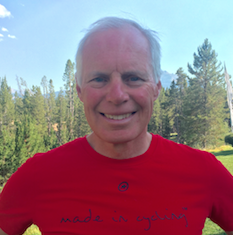 Catching up with Phil Duff, CEO of ASSOS

Since the 70s, Assos has been run and owned by the Maier family. But with an overhaul in upper management taking place in late 2015, Phil Duff was appointed as the Swiss-based company’s CEO. We get the nuts and bolts from this American businessman:

Tell us about your history with ASSOS. Of course, up until very recently, it was a family-run venture. Are you trying to retain that feel?
I got into bike racing in the early 70s, largely through my family. Dupont invented the Lycra fabric in 1958, and for the next 20 years, it wasn’t used in any athletic apparel – the thought of that is crazy these days! When Tony Maier made the first pair of Lycra cycling shorts, it had never been done before, so that was pretty novel in the cycling world. It was a big step – I started wearing the apparel straight away. I guess I was one of his earliest customers, and I’ve been riding them ever since.

We still think of ASSOS as a family business, we just have a bigger family! When I got an opportunity to get inside of the company, it kind of fit my spirit. It’s an efficient, Germanic, family-owned business. Enthusiasts very often start those kinds of companies, and that leads to real innovation. I think that’s the case with ASSOS. The legacy has been built, and the products have been driven by a backbone of innovation. The most radical change is on the customer side of the business. We just want to make the brand a little more accessible and approachable to the average cyclist.

2016 marks 40 years of ASSOS as a company; will you be celebrating in any significant ways?
We’re using our store opening in London as a bit of a celebration of our anniversary, although I must admit that we’re a company that is intent on looking forward, not backward, so we haven’t done a 40th-anniversary kit or anything like that.

You mentioned the London store opening there, how did that come about?
We opened our flagship store in our hometown of Lugano in 2010. It’s been our single biggest retail sales hub, even though the city has only 65,000 residents. So, we’ve had some experience retailing in a situation where we have our complete line, so a customer can walk in and get a head-to-toe outfit. We love that. And we were looking for both bigger markets with strong cycling cultures – London was obviously our first choice.

We plan to continue with this concept, and are in the early stages of working on opening stores in New York and San Francisco, too.

Regent Street is a bold choice of location, in the heart of London’s fashion district. Did you set out to base yourselves in this area?
We spent a lot of time analysing the London cycling retail market. Generally, we found that London is different from almost any other city with respect to this. What’s unusual about it, in contrast to almost every other city, is that the top bike shops are often located where customers work, not where they live. Realising that completely changed the way we looked at finding a location.

Take Bespoke: they have three shops at Canary Wharf, The City, and Germaine Street. You don’t see that dynamic in most other large cities. But in addition to the research into location, it was also a building that had been renovated by The Crown, which was pretty appealing once we’d decided on this general area. The building has been completely refurbished, with a ground floor that has six retail outlets in it. They chose a leading brand in six different consumer sectors, so we’ll be in some interesting company.

The design of the new shop is very much bold and modern – what processes do you go through when kitting out a shop?
There are several dimensions to that, obviously the aesthetics and merchandising. But a big part of it for us – and where most of the time and energy went into – is thinking about how the shop’s flow for the customer. For us, there’s a big educational element. Our whole company is about integrating technology into performance-enhancing apparel. This means maintaining a consistent body temperature regardless of what you’re riding and what the conditions are. There’s obviously a brand-building component to it in addition to the shop being a place of sale. So designing the layout in a way that it can be modified in the future, so as to change the flow as the brand grows, was a challenging process.

How well is the launch working out, practically?
We’re really excited about it! We wanted to open the shop before the Tour de France, but building management has been a bit late in finishing all of their construction, so they haven’t given us access yet. We won’t be open until the end of September, but that’s really not the end of the world.

What prompted the decision to part ways with distributor Yellow?
Yellow have been a fabulous partner to us since 1980, but we’re trying to get a lot closer to our end customer, and to have direct relationships with bike dealers. Think about it this way: even in Switzerland, the brand had employed an independent third party distributor. If you consider those layers of contact, the dialogue between ASSOS and the dealers was really pretty remote. So having a middleman and an independent third party distributor was a bit of a buffer.

Where do you see the brand’s future heading?
The overall drive and demand in cycling is still really good. This is very much true in England, where commuters ride to work. Cycling has become the easiest way to get around London these days. Even in New York City, it’s taking off like never before. Property developers are targeting their buildings at cyclists with inbuilt bike storage, and bike shops are even being built into the buildings.

I’m adamant that we’re going to stay in the business of cycling apparel, and that we’re not going to be a mass-market brand. We can grow enormously within our current market.

We have to address ASSOS’ controversial marketing campaigns for women’s apparel, which were widely regarded as sexist. What stance are you currently taking on that?
This wasn’t a hard discussion to have. To me, it wasn’t an issue that we had to debate at great length – the natural thing to do was to portray women and men equally as athletes, going forward.

Thinking about female athletes any differently than male athletes seems absurd to me. We have a contingent of strong female riders, in a variety of positions from sales, to finance and HR, to production. They’ve all been involved with the testing of the women’s products, so for them in particular, it was liberating to take that stance.

Big news from ASSOS is the partnership with the USA Olympic Cycling team, how did this come about?
To put it in context, ASSOS has always been about racing. If you look back through the 70s and 80s, all the Pro-Peloton teams were wearing ASSOS apparel. In those days, the teams came to the brand and actually bought the apparel themselves. It’s funny because now it’s obviously flipped and brands pay the teams to wear their gear. So, through that whole history, ASSOS has supplied the clothing to Swiss Cycling for more than 30 years.

We thought it just made sense in the US, considering how important that market is for us. Derek Bouchard-Hall came in a little over a year ago as the new president of US cycling, and his aim was to reshape the culture and the operating practices of the federation. That combination just struck a chord with us, and Derek’s personal objectives to make it a leading sports federation fit really well with ASSOS. From his standpoint, partnering with a brand like us really fit that image of lifting it up and making it significantly better. We launched in the spring and it didn’t leave us an enormous time to develop the products especially the skin-suits for the Rio games, but we worked very hard to develop a fast suit, and I feel like we very much pulled it off.

The design harks back to the golden era of US cycling, can you tell us more about that?
That was a very conscious move. The discussion we had with Derek was really about how we could make something that harks back to the glory days, when the US was emerging on the cycling scene. It had to be something that was linked to those roots but has a bit of a modern feel to it.

Is that relationship something you’re planning on maintaining indefinitely?
From the outset we committed to a five-year partnership, so not only on the Rio Olympics, but actually onto the Tokyo Olympics in 2020. I’m hopeful that it will last well beyond that as well.