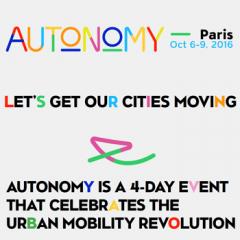 "For over 50 years urban planning has been organized around car traffic," states a blurb on the website for a new go-car-free expo. "Today, we have other ways of getting around, freeing up spaces that were previously dedicated to cars." The Autonomy website concludes: "Let’s reclaim our city."

By city, Autonomy means all cities not just Paris where the expo will take place.

The four-day Autonomy will take place in the Grande Halle of the Parc de la Villette, and kicks off on Thursday.

Paris Mayor Anne Hidalgo is spending €150m to turn Paris into the "world’s urban cycling capital by 2020” by which date the city aims to have completely banned diesel vehicles. Paris has been in the news recently for the decision to close a major highway to motor vehicles. A two-mile stretch of the car-dominated highway on the right bank of the Seine will be handed back to people.

Douglas, who is South African and ten years ago started Africa’s first contemporary Art Fair, told BikeBiz the decision to close this riverside road to motor vehicles had been a "major political issue in Paris. There is a big divide between people living in the suburbs and those living inside the peripheric of which the majority don’t own a car."

"Drivers from the suburbs are angry that they have lost a short cut through the city while most Parisians are happy about the reduced pollution and a beautiful new recreation space along the river. It is a classic conflict between the suburban car user and the carless urbanite that I think we will continue to see in cities across the world."

Of course, the news couldn’t have come at a better time for an expo extoling the benefits of a car-free city.

"This is exactly what the Autonomy narrative is about," said Douglas. "We are a platform to speed up the transition to new ways of moving around cities that do not rely on single car ownership and single driving of combustion engine cars."

He plans for Autonomy to become an annual event. "We believe that cycling has the biggest role to play in new urban mobility," he said, but added that bicycle companies need to increase their presence at go-car-free expos such as his.

"I think bike brands have been slow to realise how big the opportunity is for Urban Mobility and how they need to start showing their products at mobility events in major cities so that they are top of mind with policy makers and public wanting to improve mobility in their cities."

Share
Previous Catching up with Phil Duff, CEO of ASSOS
Next Building protected cycleways is a healthcare no-brainer, shows study