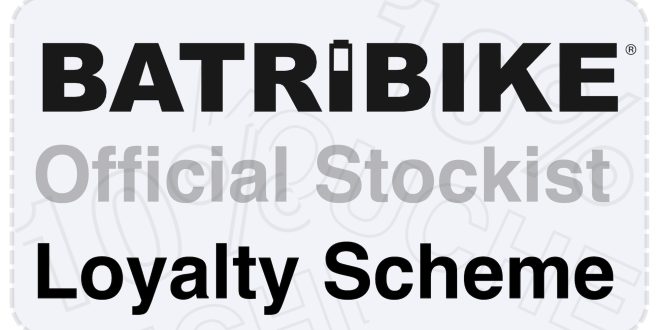 Batribike has launched a new Dealer Loyalty Scheme for 2023, which will reward dealers with discount vouchers to spend on subsequent bike purchases.

Luke Pearson, managing director, said: “We value our dealers, and look for different ways to support them, if they are selling bikes, then we are too.

“Following the success of our Autumn offer, we wanted to create something that was beneficial to both Batribike and our loyal dealers. The new scheme gives dealers extra discount on top of the existing margins.”

The dedicated Batribike Loyalty Scheme aims to thank dealers for their support. When a dealer buys a bike with battery, and pays within terms, they are issued with a voucher to the value of 10% of that invoice. The voucher can then be used against future bike purchases and is valid for three months from issue.

Pearson added: “Batribike dealers on Silver and Gold level plans already get a dedicated web page with SEO targeting their local area. Alongside this is the industry-leading three-year warranty on battery and motor. We believe that we offer a great all-round package to dealers.”

For further information on becoming a Batribike dealer, contact the Batribike office on info@batribike.com 01427 787774 or use the dealer opportunities form on the website https://batribike.com/contact-us/dealer-opportunities.

Read more: ‘Cycling will continue to evolve, and we, as an industry, will need to adapt to the changes’: Ison distributor focus

The Batribike brand was established in the UK in 2007 by the Coulson family. In 2017, in a strategic move to increase market penetration within the UK and EU, they formed a new company, Batribike Limited, in partnership with Danish company Promovec Holdings, a family-owned company from Denmark which has been developing and supplying e-bikes and e-bike components since 2008.

Batribike Limited became a fully owned subsidiary of Promovec Holdings in July, at which point it was announced that Steve Coulson would move from managing director into a more supporting role.