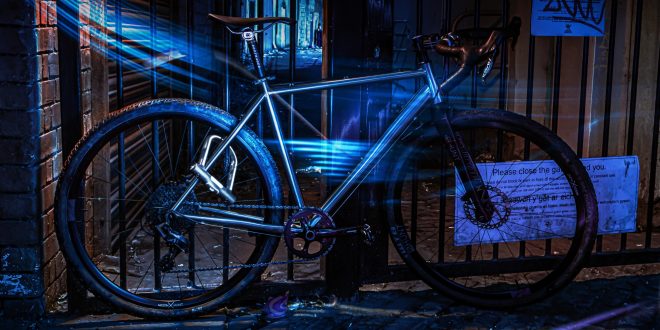 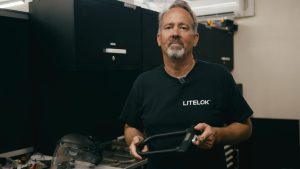 “We basically make things that take years and money to develop, then we break them, and other people break them, and that’s the name of the game,” said professor Neil Barron, recounting the history of Litelok.

“We’re just trying to beat thieves by doing a better job and being more intelligent about our materials.”

Wales-based security brand Litelok was founded by engineer and designer Barron back in 2013, but the story originates in 2009 during an innovation workshop at the Royal College of Art and Imperial College. Barron, a visiting professor, was running a group of cycling masterminds that developed the idea of a lightweight, wearable lock.

After not getting the business off the ground initially an old friend, Will Riley, offered to give Barron the cash he needed to set-up a lightweight lock brand – and Litelok was born. The first Litelok product, Litelok Gold – funded through a Kickstarter campaign in 2015 and manufactured by automotive giant Continental – was met by enormous demand. “It just went ballistic,” said Barron. “We went from completely unknown to kind of known within a month really.”

Homemade
Litelok has transformed rapidly since those early days, now with 26 employees, and for the past two years the brand has been manufacturing its own locks in-house, in its factory in Swansea. Following the coronavirus pandemic, some cycling businesses are now exploring ways of near-shoring and on-shoring aspects in order to avoid future disruption caused by global events, but Litelok is ahead of the curve.

Barron said: “I am committed to employing people and producing what I consider to be excellent products, as good as we can make them.” Litelok has also just installed solar panels at its facility in South Wales, to power its production lines and minimise the environmental impact (and also help save some money during the energy price crisis in the UK).

The brand hopes that these details – UK manufacturing, the relentless design process, and the focus on sustainability – will help retailers share the Litelok story with customers, to help drive sales. The priority for the brand is helping to get more people cycling, and to help them protect their bikes, as between 25 and 30% of people that have a bike stolen never ride again, according to Barron.

“To me that is kind of appalling. I guess it’s my job to try and give people the tools that will protect against the thieves,” he said. “We know that thieves are largely opportunists. There are some gangs and organised crime, but I think we would try to do our best for any customer that would back our product to protect their bike in any situation.”

Barron said: “What we’ve done with the Core product is shaped it in kind of an oval, lozenge shape that hugs your hips, which allows us to make a universal wearable lock which adjusts to any body type. You don’t need a small, medium, and large size, so with that product you can reach a big range of people.”

But the latest development in the Litelok catalogue is the release of the Litelok X1 and the Litelok X3 – the newest additions to the anti-angle-grinder bicycle lock market, launched earlier this year. The Litelok X1 is a relatively lightweight (1.7kg) D-lock, designed to offer even better security than the best-selling D-locks on the market, offering a claimed five-times more resistance than its rivals.

“What we’ve come up with is basically our own technology, which uses ceramic composite material that is fused to a hardened steel construction for a D-lock,” said Barron. “We’ve tried to take every single thing about the D-lock that we didn’t like – rattling, possible damage to your bike, corrosion, sticking locks, not being able to see the lock in the dark – and we’ve addressed all of those.”

The Litelok X1 comes with a reflective strip to see in the dark and a Twist & Go mount, and an anti-twist locking mechanism (which means it would require two cuts from a grinder to remove) all in a super-tough construction that aims to hold off an angle grinder long enough to deter thieves, for £149.99 retail.

Litelok X1 is available now online and from selected retailers, but Litelok will also soon be releasing the X3, an even tougher model that offers 15 times more angle grinder resistance than other rival locks, weighing 2.1kg and with an Abloy (almost) pick-proof cylinder. Many pre-existing locks can be cut within 20 seconds using an angle grinder, as I saw first hand at the Litelok X product launch held at Mud Dock cafe and cycleworks in Bristol last year.

The X meanwhile takes minutes to break through, even for a single cut, and no one at the Litelok product launch was actually able to break through the lock. With angle grinders now available for under £50 at a range of supermarkets and DIY shops, anti-angle grinder locks will become an essential product in the bicycle lock market.

The future
Like the rest of the bike trade, Litelok has had to navigate a global pandemic and the uncertainty caused by Brexit, followed very swiftly by war in Europe and the energy and cost-of-living crisis that has followed. This has made trading difficult for many businesses, but particularly ones that manufacture in the UK.

Barron said: “Making things ourselves there’s obviously a limit to what we can do. I think there’s a general feeling that the industry has dropped a bit, that the Covid bounce has dropped back again. We know that thefts are going the other way, they’ve gone back up, and there are more bikes in circulation, so there’s probably even more need for us now than there was a couple of years ago.”

Litelok’s main channels of sales are direct to consumers and through Amazon, but Barron is passionate about cycle retail and said he is also keen to work with retailers and help support them. He said: “I think shops are struggling more. We’re selling much more direct. We have to, to make a profit. We need to be as direct to the consumer as possible. We sell direct and through Amazon, that is our primary channel, and we have some retailers.

“But we can’t afford to go through the big distributors that some of the other brands can. Those things restrain what you can do, but they’re also great because you can control a little bit more your relationship with the customers. We’ve got a customer service team that is constantly talking to customers about the product to find out what they think of them, any problems they have, and that will feed back into our product team.”

Barron added: “This business hasn’t been around in a recession, so we don’t know exactly what the lock market is going to do. But the passion of why I started the business is still there, and the harder people’s lives are the more we might be able to help them look after their stuff.”

For anyone wanting to learn more about Litelok directly from the brand, contact brand and product lead Phil Dowling via Phil.Dowling@litelok.com. 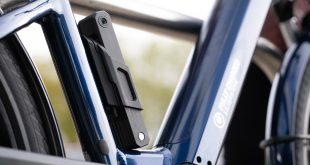 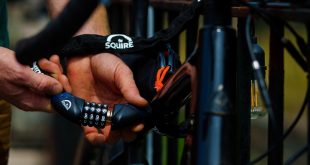 In safe hands: British lock brand Squire on its past, present and future

Price wars – is there a better way?