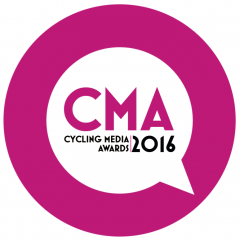 The 2016 edition of the Cycling Media Awards officially opened its doors as the crème of the cycling industry filled the Islington Metal Works. The night started with a speech from Filippo Ubaldini, CEO of the recently-launched BIKE channel. The head of the official media partner discussed the need for the industry to work closely together in the coming year.

The first award of the evening for Magazine of the Year went to the Rouleur team, for their consistently high-quality output. Bike Radar fought off steep competition for the Website of the Year award, whilst industry guru David Gould picked up the BIKE channel sponsored Specialist Writer accolade for his work with Singletrack. Best Coverage by a Mainstream Print went to the team at The Guardian, which was awarded by sponsor Green Commute Initiative, and Best Coverage by a Mainstream Online went to BBC Sport Online.

2016 has been a busy year for the BIKE channel team, who not only filmed the entire event for a one-off special to be aired later this year, but also managed to pick up the Best Broadcast Coverage award. Event sponsor Crotch Guard handed out the award for Best Cycling Podcast to the team at The Cycling Podcast, and the prestigious Blogger of the Year, sponsored by leading solid tyre brand Tannus Tyres, went to expert of all things mountain bike, Chipps Chippendale.

The second Rouleur win of the night went to veteran photographer Marshall Kappel, who won the Photographer of the Year award for his outstanding contribution to the medium. Last but by no means least, the final award of the evening honoured a true influencer of the industry. The Industry Icon was the only award of the evening chosen by the BikeBiz Team, and couldn’t have gone to anyone other than the revered Tym Manley for over thirty years of continued dedication to cycling media.

Share
Previous ASSOS to open first London store
Next In the saddle with Alex Trimnell, CEO of Muc-Off