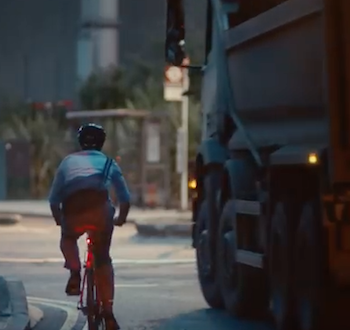 Will DfT release a video telling HGV drivers not to overtake cyclists?

The Department for Transport’s Think! road safety campaign has this morning released a video of a cyclist being "left-hooked" and crushed by an HGV at a junction. "Don’t get caught between a lorry and a left turn," says a video caption. "Hang back," it continued. The video was shared on the Think! Twitter account, and has been immediately slammed by cyclists, many of whom said the advert was an example of "victim blaming."

Responding to the campaign, Chris Boardman, the UK’s unofficial "cycling Csar" tweeted: "companies, THINK buy lorries that let your poor drivers see more than 70% of the road, they exist."

He added that the advert was a "desperately misguided campaign that a) tries to make death fun b) vulnerable road user responsible for vehicle not fit for road."

The 45-second advert shows a male cyclist undertaking an indicating HGV fifteen or so metres before a junction, but this isn’t made entirely clear. The film is poorly edited because the HGV appears to speed up between the undertake and the junction for at the speed the cyclist was going he should have been well past the HGV. Also, in fifteen metres the HGV driver should have made more double checks in his mirrors before carrying out the left-hand turn.

The HGV driver, propelling a potentially lethal machine through a crowded city, is not called out in the video. So, is the DfT planning to bring out a video explaining why HGV drivers should never overtake cyclists and thereby putting them in their blindspot?

The video has library footage of things it’s best not to get between, such as charging rams, meat cleavers and axes. In fact, most of the video is wasted on such tasteless material instead of the 45-seconds being used to get across serious messages for both HGV drivers and cyclists.

According to the government’s Think! website 35 percent of cyclists believe it’s safe to be positioned at the front left of an HGV so the ad campaign is aimed at changing the attitudes of those 35 percent. The website does not have details on how many HGV drivers believe it’s OK to overtake cyclists, or whether they believe their vehicles can be safely accomodated in streets busy with people.

The Think! website said a press notice about the new campaign will be issued later today [it has now been issued], and claimed that "PR will be used to highlight the dangers of HGVs to cyclists through cyclist trade press."

The website goes on to state that PR will also be used to "raise awareness of the campaign to HGV drivers through freight and haulage trade press." If so, that’s good, and BikeBiz will be asking whether this, for balance, involves a different film, one that shows an HGV driver to be at fault.

It’s also worth noting that the Think! campaign is able to produce highly factual videos about road safety. Check out this video urging motorists to slow down near horses, and see how equestrians are not blamed.

According to @Hackneycyclist the film was shot at the junction between Monier Road and Dace Road in Tower Hamlets, London. Not too far from this junction is the bike shop Britain Loves Bikes.

BikeBiz has submitted a FoI request in order to get the script the DfT supplied to the film-maker responsible for the HGV video.