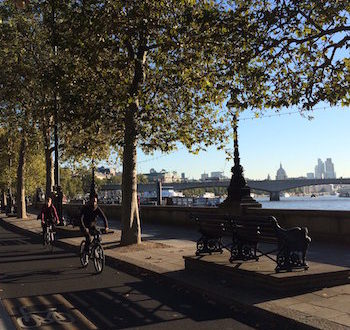 An Australian Professor of Urban Transport and Public Health is urging cities to offer more choices for active transport, such as cycling and walking. Professor Mark Stevenson of the University of Melbourne has written one of the articles in an "Urban Design" series published in The Lancet.

The three-paper series features authors from leading global academic institutions, and quantifies the health outcomes that could be gained through changes to urban design and the transport system

The series was launched today at an event hosted by the United Nations Sustainable Development Society Network in New York, and compares six global cities – including London – with a variety of livability indexes, economic, land-use and transport attributes. The other cites examined are Melbourne, Boston, Delhi, Sao Paulo and Copenhagen.

With the world’s population estimated to reach 10 billion by 2050, with 75 percent living in cities, city planning is now being recognised as a part of a comprehensive solution to tackling adverse health outcomes.

The authors identify the health gains that could be achieved if cities encouraged a modal shift from private motor vehicle use to active transport namely bicycling and walking, and increased public transport use, services and amenities.

The research findings offer policymakers evidence that substantial health benefits can be achieved for urban populations by adopting different approaches to urban and transport policy and planning.

Professor Stevenson is a cycling specialist, with one of his studies being "safer cycling in the urban road environment."

“This research has considerable implications for policy change. By quantifying the need for integrated city planning and its focus around modal choice for cities, it emphasises the need for sustainable transport that will deliver health gains for the future."

These include having services and facilities within walking distance, a mix of employment and housing across the city, reducing the availability and increasing the cost of parking, infrastructure that supports safe walking and bicycling, open spaces, and reducing distance to public transport.

The series also proposes a ‘compact city’ model based on a 30 percent increase in land-use densit and a 10 percent shift away from private vehicle use.

The findings provide a blueprint for achieving a number of the United Nations’ Sustainable Development Goals that include promoting healthy living by making cities inclusive, safe, resilient and sustainable.