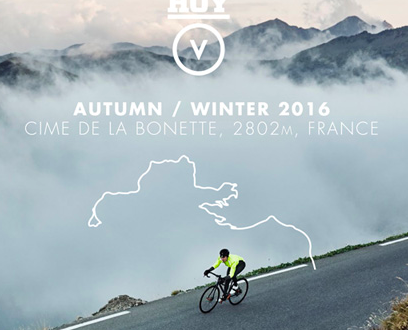 HOY Vulpine’s AW16 range has now been released, with a focus on layered garments that provide flexible solutions for variable climates.

As a collaboration between British urban cycling apparel company Vulpine and Olympic cyclist Chris Hoy, the range was tested on location at French Alpine cycling hub Col de la Bonette, a 2,715-metre climb known for its volatile conditions. The modular range is designed to be comfortable, adaptable across all seasons, and understatedly stylish.

“After winning awards for last autumn/winter’s range, in our first year, we’ve gone up a level again,” said Nick Hussey, Vulpine founder. “Chris and I wanted to concentrate on getting the details right, for real-world riding. A lot of British riding involves dark skies and mixed conditions. So we’ve added a lot of reflectivity. But we researched perforated reflective fabric, so that it still breathed. We created a seamless merino base layer, with a high neck for really cold rides. We needed a waterproof jacket to protect it – the Signal Jacket – which is neon, reflective, tough, warm, and ventilated. It will survive hours of riding in driving sleet. We couldn’t find this kit so we made it.”

Vulpine’s team started their ascent in the range’s lightest garment, the long-sleeved Senko Jersey, pairing it with thermal bib shorts and a packable Signal Gilet to provide warmth in the early morning air. As they climbed in altitude, they swapped into the Fortress Jersey, which is constructed from a thicker weight of water-resistance fabric, and arm warmers, which could be taken on and off when necessary. As they neared the summit, the team changed into the fleeced Roubaix Jersey, finally changing into the ripstop-incorporated, reflective Beacon Jacket, which was worn on the nearly-dark descent.

Sir Chris Hoy commented: “We all know that autumn and winter seasons in Britain can be challenging and unpredictable. Throughout my riding, I’ve always taken the approach of layering up n the colder months; having key items of kit that stay with me and are added to as the temperature drops. Nick and I share the same principles in this respect, but we knew that there were so many improvements that could be made in this area, so I’ve worked with vulpine to design a brand new modular range for autumn/winter that we’re both really proud of.”

The range at a glance: