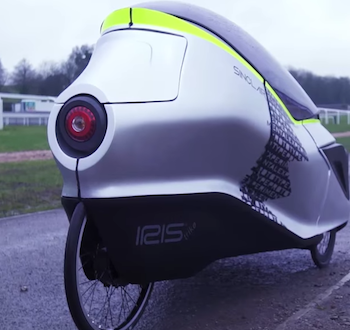 Why is the Sinclair electric velomobile getting loads of press?

BikeBiz carried a story about Grant Sinclair’s trike’s launch earlier today, and many other news sites have also featured it. So, why is the Sinclair eletric velomobile getting loads of press, including positive coverage from the BBC’s transport correspondent? Because of Sir Clive Sinclair’s ill-fated C5, that’s why.

This piece of tech from 1985 is often still wheeled out as an example of "how not to do it." It was an electric trike with no roof and a pitifully low speed, yet was talked about – by Sir Clive Sinclair mainly – as the future of transport. It flopped. Painfully, memorably.

Being the nephew of Sir Clive means anything you make that’s trike-shaped is going to get media attention, even if the product category is actually full to bursting with very similar products. Electric velomobiles sell in their hundreds, and usually cost almost twice as much as the Sinclair variant, but they’re not new or revolutionary.

And Grant Sinclair is perhaps overselling his machine by claiming it can do things that it can’t, and things it really shouldn’t be doing anyway, if, that is, it wishes to stay street-legal.

Sinclair’s website doesn’t say so but it appears that the "eco" version of the velomobile has a 250 watt motor that cuts out at 25kph. This is what it’s supposed to do if anyone over the age of 14 wished to use it on British roads, but it’s not billed as a machine you have to pedal to get to go at the "SUPER FAST" speed promised on the website.

The 750w "extreme" model can’t be sold as seen on the website – it will be classified as a moped.

"Anyone using it unregistered in public in the UK could be prosecuted for a variety of motoring offences," Peter Eland told BikeBiz. Eland is the Bicycle Association’s e-bike expert, and the former publisher of Velo Vision, a magazine that specialised in velomobiles and similar human-powered vehicles.

"Price is often quoted as a factor in their lack of wider popularity," says Eland of velomobiles in general.

"If Sinclair can make them for the advertised price, they would be quite attractive – most velomobiles are in the 6000 Euro upwards range, his is £2999. At 55 kg his are a little heavy, and also more upright and less aerodynamic than many designs, but some people may prefer that."

Eland adds that the fully enclosed style, with a large transparent canopy, has not proven especially popular in practice – most velomobiles use a heads-out design instead (as did the C5, leading to much mockery).

"This avoids issues of overheating in sunny weather, and fogging in humid conditions, or visibility issues due to raindrops," said Eland.

"Overall it’s an attractive enough design – but Sinclair is likely to be disappointed if he is basing its viability on large numbers of sales. As far as I’m aware even the most popular velomobile makers only currently sell a few hundred units per year, rather than thousands."