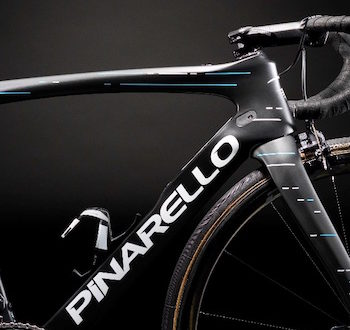 Pinarello denies breaching the patent for a downtube design as alleged by Victor Major of Belgium-based Velocite Cycles. The Italian company released its latest Dogma earlier this week leading to claims of patent infringement by Major.

"Mr. Major chose to … depict Pinarello as a sort of thief, who uses a patented design without permission and does not respond to legal letters."

The company added it will "take appropriate actions against any unsupported allegation, explicit or implicit, of being an infringer or a thief."

Pinarello agrees that Major, through his Taiwanese law firm, wrote to the firm in July last year, adding that this was "answered (on the 4th of August), through its law firm, clearly and unmistakably pointing out that Mr. Major’s communication was lacking essential information since it did not identify which of Pinarello’s products were contested nor did it give any explanation as to why such products would allegedly infringe Mr. Major’s patents. Providing this information is not ancillary but mandatory when an infringement is alleged."

Pinarello claims its patent attorneys asked Velocite’s attorneys to clarify his position and also pointed out "that Pinarello’s reply was to be expected “not earlier than mid of September 2016, provided that, in the meantime, we will have received the information mentioned above”, information that Pinarello was still waiting to receive from Mr. Major."

Pinarello’s patent attorneys told Major that bicycles with aerodynamic frames have been on the market for many years.

"Although Pinarello can understand that his behavior may procure Mr. Major a rise in his notoriety, that same behavior is deeply unfair, since Mr. Major himself is perfectly aware that he chose not to discuss the issue with Pinarello," claims the Italian company.