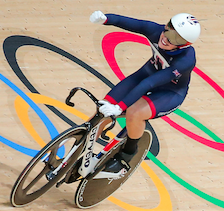 The news is made even more significant as it falls over the nationwide Women in Sport week, which aims to celebrate the female icons of the sport, whilst also welcoming the general increase in women’s cycling.

In the past summer, Welsh female cyclists brought home three medals from the highly successful Rio Olympics, whilst Elinor Barker received the accolade of Olympic champion for her record-breaking time in the Team Pursuit.

National development manager at Welsh Cycling, Georgina Harper, said: “Reaching 1,000 female members is a significant milestone for Welsh Cycling. It demonstrates that given the opportunity, women will take part in cycling and make a commitment to the sport, as competitive or leisure cyclists.

“Having inspirational women like Becky and Elinor at the forefront of our sport helps to inspire more women to cycle. It’s the dedication and passion shown by our coaches, volunteers and Breeze Champions that are creating the opportunities in Wales.”

The British Cycling Breeze Network has been active in Wales since mid-2014. The initiative organizes fun and social bike rides for women; the pilot for the events created more than 1,300 opportunities for women to cycle. Following the success of the program, Welsh Cycling rolled out the She Cycles initiative.

In the last two years, there has been a 57 per cent increase in female British Cycling membership in Wales. Of the 1,000 female members, 48 per cent hold race licenses that allow them to compete in events throughout Wales. Welsh women represent five per cent of the 20,000 female members across the UK.