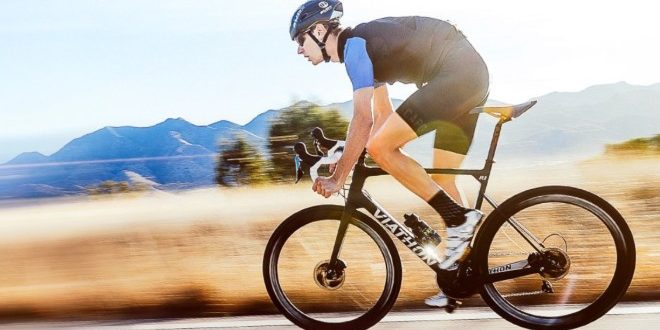 Viathon is a start-up carbon bike brand with a difference. It’s not the products: a three-frame range of MTBs, and gravel and road bikes. It’s not the frames: they aren’t open-mould no-names, all three shapes were CAD designed by the legendary Kevin Quan Studios of Toronto, Canada. The difference is being wholly owned by US hypermarket chain Walmart.

Cue the cheap-crap jokes. But the bikes are neither crap nor cheap. Don’t squint at the pix, the forks face the right way. Dollar-for-dollar there are other carbon-framed high-end bikes out there that undercut the Viathon offerings. There are no whiz-bang spangles – for instance, the MTB is a vanilla hardtail.

You cannot buy a Viathon bike from one of Walmart’s 4000 plus US stores (or from Asda supermarkets in the UK). Sales are via the brand’s website, and this does not feature the Walmart name in the “about us” section. (The Walmart connection can be found only on the site’s copyright line.) The website has no we-can-offer-keenest-prices-because-we’re-Walmart spiel.

Viathon is a standalone direct-to-consumer brand that, by rights, shouldn’t exist. Why would pile-em-high-sell-em-cheap Walmart be interested in such a high-end part of the bicycle market when the market-dominating retailer is already America’s biggest seller of keenly priced bicycles?

The simple answer is: because it can. And it’s not as though it was even that expensive to create, at least not in Walmart terms. Unlike, say, the car industry, it’s relatively cheap to launch into the world of making bicycles, even bespoke framed ones. In effect, Viathon is a pop-up bike brand, and just as quickly as it has appeared it could just as easily disappear again, no skin off Walmart’s very large nose.

Brand manager Zack Spinhirne-Martin doesn’t see it that way. He wants to grow the brand slowly but steadily. I spoke with him at the recent Outerbike expo in Idaho, the second public outing for the brand. (The first was at the Sea Otter expo earlier in the year.)

“I was recruited two and a half years ago to raise the game and show what Walmart can deliver in terms of bikes,” Spinhirne-Martin tells me.

Viathon was his idea, springing from his background as a former pro rider, a one-time USA Cycling team mechanic and latterly a web commerce geek with Backcountry.com and before that Competitivecyclist.com. Brought on board to run Walmart’s online bike sales, he pitched the idea of a standalone brand.

“Walmart is the largest retailer for bikes in America by a good margin. 99% of Americans walk into a Walmart store every week. So we have the greatest potential to reach a larger subset of the American population than any bike shop, or any other brand,” he claims.

Not that Viathon is going mass-market anytime soon. It’s a one-man Canyon, with Spinhirne-Martin sitting at his computer in San Bruno, California,  bolting on expertise when he needs it. He doesn’t have a marketing team: he outsources that to Idaho-based Cranktank, the PR and marketing outfit led by Adrian Montgomery, ex of Scott, and Scott Montgomery, ex of both Cannondale and Scott and who is also the current president of Reynolds Cycling. Spinhirne-Martin doesn’t need to fret about shipping: he outsources that to industry veteran Richard Wittenberg of Lucidity-Podium Marketing, who has been involved with in-house logistics for brands such as Ridley, Cannondale and Factor. Blog postings are outsourced to cycling journalist Aaron Gulley.

By building via consultants and going straight to the consumer without any immediate plans to be available in Walmart stores enabled Spinhirne-Martin to get the brand up and running quickly.

“It’s easier and faster for me to expand our bike offering online than it is to go into stores. I can build proof of concept and then push over time into stores.”

“I built the brand without them knowing about it at all,” reveals Spinhirne-Martin.

“They knew about it prior to launch only because I happened to meet Steuart in our office in January so I was able to show him a couple of pictures. Their investments are totally separate from Walmart even though Steuart is on the main Walmart board.”

The impetus for the brand was therefore personal, not corporate. “I wanted to make bikes that I would want to ride,” says Spinhirne-Martin.

“And I want to get more people on bikes. The gravel scene is important for that. It’s exploding right now because people are afraid of riding in traffic. Not everybody has great trail access, but almost everybody has access to dirt roads.”

Marketing has been slow-burn so far, rolling out a website and social media, getting journalists on the bikes at Sea Otter, and paying for GCN’s Simon Richardson to ride the G1 from Outerbike in an advertorial video posted on 12th July and which has already had 34,000 views.

If successful, Viathon can be rolled out widely, claimed Spinhirne-Martin.“With the backing of Walmart, we can scale very quickly.”

“I’m focusing on the US right now. I’ve already gotten questions for people internationally. We could ship anywhere but I’m concerned about customer service, because I don’t have distributor partners globally. I want high-level quality customer service to begin with, and I can control that in the US.”

Savvy consumers may baulk at the Walmart connections – not just because of the value connotations but also the corporate’s reputation for poor labour relations – but nor is Viathon a bike brand for the decal-focussed. Which raises the question who is the brand aiming to reach? The bikes are clean and simple, classy but without any fanfare. Spinhirne-Martin wouldn’t reveal sales targets but, reading between the lines, he likely doesn’t have to sell many for the brand to be considered a success. In effect, the brand is a sortie into a high-end scene, allowing Walmart to test the waters of a rarefied market.

Viathon is run as a digitally native vertical brand, a phrase coined by Andy Dunn, founder of US menswear brand Bonobos.

Writing in 2016, Dunn wrote: “Digitally native vertical brands (DNVBs) are maniacally focused on the customer experience and they interact, transact, and story-tell to consumers primarily on the web.”

In 2017, Bonobos was sold to, you guessed it, Walmart.Walmart wanted Bonobos because it was a favourite of high-income urban millennials. It’s almost impossible for Walmart to develop premium offerings with the Walmart name, which is synonymous with keen pricing and out-of-favour out-of-town malls.

Viathon, like Bonobos, goes against the fundamental tenets on which Walmart was built. And that is the point. Viathon will benefit from the supply side muscle of Walmart, it may even one day be sold in Walmart stores, but it won’t ever market itself as offering “Walmart bikes.”