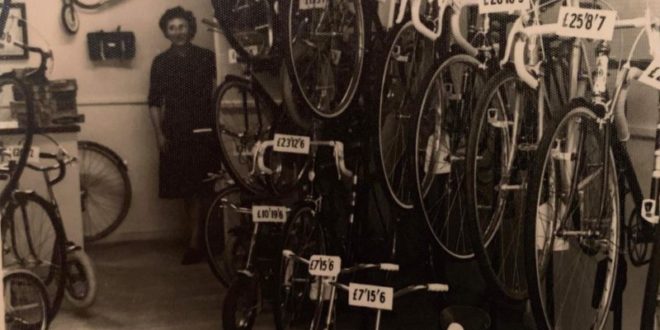 Buying the stock for £100, they moved in above the shop in 1958, which became the family home as well as their place of work. Roy worked part-time at the shop in those days, with Doris taking up the mantel working full time until Roy gave up his job as general manager from a local engineering company in 1970. They acquired numbers 71, 67 and finally 73 Victoria Road which is what is known as Swinnerton Cycles. After 36 years working together, seven children, 22 grandchildren and seven great-grandchildren, they retired and ‘passed the baton on’ to the next generation.

Roy started his club cycling career with The St Christopher’s back in 1939, Doris shortly afterwards in 1944. They married in 1950, the same year Doris was elected club president. Doris also participated in the formation of the Lyme Racing Club and was elected president in 1956.

In the 1960s, both Roy and Doris helped with the formation of the Newcastle Track Association. They helped Nolen Burgess in forming the North Staffordshire Cycling Association which bought all clubs together under one umbrella, although the NSCA does not exist today.

Doris’s funeral will be on Wednesday 25th September at St Gregs Catholic Church, Stoke-on-Trent at 11am.