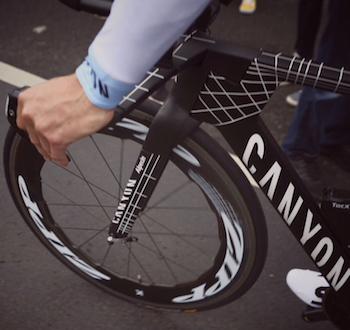 Today’s time trial win by the Pinarello-riding Geraint Thomas sets up an intriguing leadership tussle in Team Sky. The Welshman was not the favourite to win today’s opening stage in rainy Dusseldorf.

The Canyon-riding Tony Martin was the favourite to win giving Germany the stage winner in a German city on a German bike with a paint job inspired by a German band. It was to be an impressive story for a country that – because of doping scandals involving Jan Ullich, its former favourite son – had cooled on the Tour de France.

Martin was supposed to win the time trial on Canyon’s Ultimate CF SLX Kraftwerk. The Koblenz-based online bike brand will be selling 21 replicas of this bike on Monday, to retail at a smidge under £9000. The bike’s black and white paintwork was inspired by Kraftwerk founder Ralf Hütter. The Dusseldorf band is linked to the Tour de France with an album named for the world’s largest annual sporting event.

“My memories of partying in friends’ basements as a teenager are dominated by hearing Kraftwerk’s groundbreaking sounds," said Canyon founder and CEO Roman Arnold.

"Kraftwerk and cycling have a special and unique connection – their music, and all that they do, has inspired our work at Canyon in so many ways across the years. It is an unbelievable honour for us to pay respect to everything that Kraftwerk stands for and has achieved in such a fitting way with these stunning bikes."

While Thomas is the first yellow jersey winner of this year’s Tour the overall favourite to win the three-week race remains fellow Briton Chris Froome, aiming for his fouth maillot jeune.