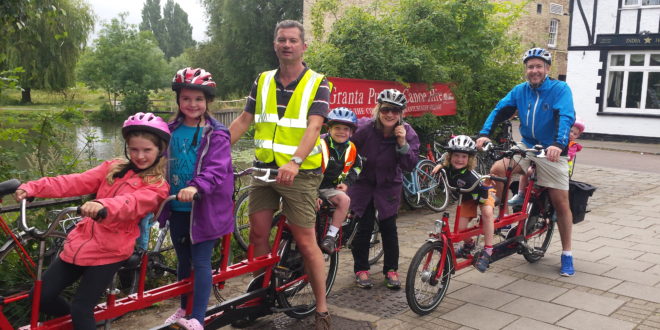 Cargo bikes are growing in popularity in the UK, but they’re not just for carrying goods. Increasingly, parents are transporting kids by cargo bike, saving money and time getting around.

Although there are pockets of growth – with Cambridge and parts of London experiencing booms – other parts of the UK are yet to catch on. However, with the right support, and safe enough routes, even parents who haven’t cycled for years can be tempted to transport their kids by bike.

In 1999, the School Run Centre in Cambridge became one of the first shops in the UK to sell child-carrying cargo bikes. Founder Hugh Salt says the main draw for parents is practicality. “The logistics are amazing,” he says. “I have one parent with a tricycle cargo bike, who saved £3,000 to £4,000 over four years [versus a car]. Saving £1,000 a year when you aren’t on a big income, with children, makes a huge difference. As a parent, you never have a minute in your day, and being able to cut those travel times down is great. “Cambridge is so small, but it suffers from gridlock. With a car, you have got no idea how long it will take to get to school, because of the traffic. With a cargo bike, you know. It ticks so many boxes for parents here.

"I have one parent whose kids were at three different schools, which made it impossible to use any other transport than an electric cargo bike. Electric assist has opened up a whole new world for people who wouldn’t have used them, because of hills.

“Parents come in and say ‘it’s life-changing, you have made my life easier’. Even down to the special needs customers, they send me emails and say ‘we didn’t believe this was possible, it’s liberating’.” Salt says many Cambridge parents are from cycle-friendly countries, where cycling kids to school is normal. Once parents see other parents using them, however, they become interested too. “Now, when you go out in the streets of Cambridge, you see three or four cargo bikes in ten minutes. There’s usually a line of ten or 20 outside schools and nurseries,” he says.

London-based CarryMe Bikes CIC helps parents find the right cargo bike, offering support, bike loans, test rides and sales. Alix Stredwick, who runs Carry Me, says the purpose is “getting people through the stages of cycling with kids, trying out lots of equipment and giving them the confidence to ride on the streets”.

“One-to-one attention is really important, to make sure they are comfortable and happy with the details such as the steering, brakes and gears,” says Stredwick. “You have got to try before you buy with cargo bikes – try as many brands as you can.”

BikeBiz joined one of Stredwick’s East London park sessions – funded by Cycling Grants London – where parents ride different cargo bikes in a supportive environment. One mother of four, Esther, who hasn’t cycled since childhood herself, was considering carrying her youngest by bike as a way of avoiding local traffic jams.

Stredwick says: “Research shows it is the women of the house who make transport decisions, so we need to get women onside, though both parents have to be on board.
"I enjoy talking to female customers because they get a rough time in traditionally male bike shops.”

Salt also sees test riding as essential to get parents riding. “It’s pretty amazing, people’s reaction people when they see them; the main one is happy smiling children and happy
smiling parents, and that’s the best advert you can get.”

Cargo bike trends
Cargo bikes tend to suit parents with two or more children. The Bicycle Association doesn’t know how many cargo bikes are out there, but its operations director, Steve Garidis, says the BA is working on this data for release later this year.

Cargo bikes mainly come with two and three wheels, with and without electric assist. Two wheels is the most popular option. They are easier to manoeuvre if the rider has good balance, and rides like a normal bike. However, not everyone is comfortable with these, and the capacity of two-wheelers tends to be lower.

Three wheelers have greater carrying capacity, with some taking up to eight children. Perhaps counterintuitively, three-wheelers can be less stable and prone to tipping if ridden too fast around corners. They are also more affected by potholes, and harder to manoeuvre on a cambered road; the rider may feel they are constantly steering away from the gutter. However, they can be great for journeys with a lot of stopping and starting, or for parents with balance issues.

So, what about electric assist? Stredwick says: “Recent advances in battery technology are a game changer for e-cargo bikes. They are now lighter and last longer; they’re more sophisticated. The mid-drive option responds to torque through the pedal and reacts with a smooth power output, so you don’t lurch when you set off. Where earlier hub models could be hit and miss, it gives you more control, it’s a good feeling.”

She says the Shimano Steps system and the Bosch Performance line are good options and cost about the same. “Don’t be snooty about electric assist,” she adds. “When you’re carrying two or three children and shopping, there’s no shame in it; there’s no point doing your knees in.

Salt implores potential users not to be put off by the non-bicycle like appearance. “That’s really the one key thing with these bikes,” he says. “A lot of bike shops look at them and think ‘I won’t tackle that’. There’s a lot to learn, but once you’ve got the hang of it, it’s not that hard. Make sure your mechanics can deal with hub gears and hub-based brake systems. Most of the components are the same, although the box is there and they take up a lot of space. Some shops are put off if there are spares that they don’t carry.”

As a distributor, he says, he is happy to talk shops through how to fix the bikes. “We like to support our retailers as much as possible." Stredwick feels it is worthwhile for a shop to become an expert in cargo bikes and family cycling. The Green Commute Initiative’s Rob Howes believes parents could be a new potential customer for bike shops alongside their traditional ‘cyclist’ customers.

New cargo bikes start at around £1,400 and can reach £4,000 with accessories; e-assist tends to add an extra £1,000 to the cost, but Stredwick says: “I think as soon as people start seeing it as a replacement for a car, they are much more willing to spend £2,000 or more.

She adds that, because they are well built, they keep their value, and can be sold on for two-thirds of the original price. Second-hand, they can sell from £400 to more than £1,800, depending on the condition.

Wider issues
Good infrastructure is key if people are to feel safe cycling with kids – this means safe routes that are protected from traffic, or on low traffic routes, and can accommodate larger cycles. It also means availability of parking. Stredwick says we need pressure on local authorities to provide safer cycling routes as well as safe, secure parking for larger cycles, as cargo bikes often don’t fit into existing bike storage units and stands. 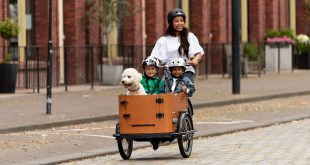 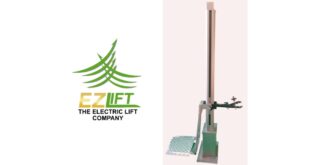 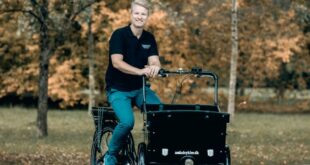