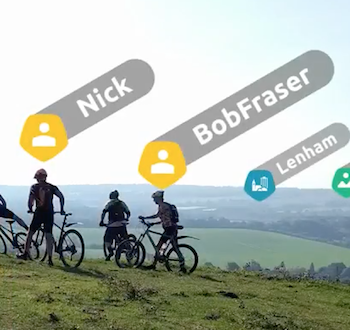 The Ordnance Survey introduced an augmented reality layer to its smartphone app in October, showing a live view of hills and other landmarks. I took a screenshot of this app showing some of my local hills but, via Photoshop, added a label for my bike and, as a jokey spoof, tweeted it as though the app could spot "Carlton’s road bike."

Well, guess what, the latest update of the Map My Tracks iOS app can almost do this. Not only can it identify nearby peaks or towns it can also add a label for any other app-users that are tracking live.

"Imagine standing on the side of the road at next year’s Ride London and with the app you can see who’s approaching," said Tinderhouse director Nick Tatt.

"If only mobile phone’s were allowed in pro races then our technology could be used to give spectators real-time stats of the riders approaching and as they pass by."

Impressed by the accuracy of the new augmented reality layer in the @OrdnanceSurvey app. pic.twitter.com/s1R1Tji9pK

Sadly, the Map My Tracks map cannot yet track an "idjit in a BMW going too fast".