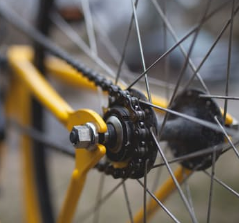 Research based on a new analysis of police crime figures has identified the primary theft hotspots in the UK.

The statistics have been compiled from a comprehensive repository of crime data from every police force in England and Wales.

The report, which was commissioned by bicycle insurer Protect Your Bubble, shows that bikes parked at railway stations carry the highest risk of being stolen; the results also show that thieves target shopping centres, car parks and hospitals.

The latest police records, covering the 12 months leading up to September 2016, show the locations of nearly 82,000 bicycle thefts. That number equates to roughly 227 bikes stolen every day in that period. In 72 per cent of cases, the thieves were not apprehended and the report was closed.

The location with the highest theft rates in the UK is Elder Gate at Milton Keynes railway station. In the past year, 27 bikes were stolen from the parking area; a further 19 were taken from a location near to the front of the station.

The location with the second highest theft statistics is Meridian Square, an area that leads to Stratford Station in East London. Bikes in this area are thought to be at a higher risk of being stolen due to the close proximity of the Westfield shopping centre and the Olympic Park.

Rob Basinger, head of the UK division of Protect Your Bubble, said: “When you contrast the cycle theft rate for Oxbridge with the rest of England and Wales, it’s abundantly clear these university towns are as popular with thieves as students. There’s no safety in numbers, either. In towns like Cambridge, a high number of cyclists results in a high number of thefts.

“Bike theft is a nationwide issue, but there are some streets that stand out as having a particular problem. Commuters leaving bikes at railway stations for any length of the time stand a chance of being targeted.

“If you have to leave your bike on the street then make sure it is locked securely and, as with any item of value, if you think it may be at risk then consider taking out insurance for extra peace of mind.”

The top five bicycle theft hotspots in the UK are as follows: