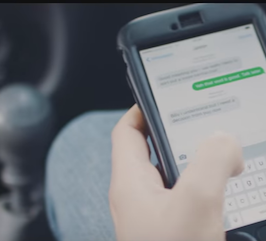 Texting drivers must be targeted, says Cycling UK and AA

The AA and Cycling UK have released a statement that driving disqualifications must be made the norm for new drivers and repeat offenders.

The leading motoring and cycling charities joined forces to impress upon the government the need to close an “exceptional hardship” loophole, which has been exploited by many of the estimated 8,600 motorists currently operating vehicles with 12 points on their licence this year.

Both groups have said that drivers should not be allowed to avoid the ban, which creates exemptions for cases of inconvenience and hardship, despite the Government’s support of initiatives that aim to reduce mobile phone-related fatalities.

Cycling UK’s senior road safety and legal campaigns officer, Duncan Dollimore, commented: “Now is the time to make distracted driving as taboo as not wearing a seatbelt or drink-driving. We must tackle this problem head-on; it led to 22 deaths and 440 crashes last year.

“Cycling UK wants to see drivers who repeat-offend off the road before they kill or cause serious injury – something the current review will not address. This is why Cycling UK has joined forces with the AA, to show Government that road users are collectively serious about ending avoidable deaths and serious injuries on our roads.”

AA president Edmund King added: “The devastating consequences of distracted driving are vividly portrayed in our latest campaign film entitled Cadence, which we released last week. Hopefully, our collective efforts to affect behaviour, together with the Government’s promise to increase penalties for mobile phone use while driving, will help to make this mobile madness socially unacceptable."

Cyclist Lee Martin was killed last year by texting driver Christopher Gard. The event took place just six weeks after Gard had avoided receiving a ban due to the exceptional loophole, despite having six previous convictions for driving whilst using a mobile phone.