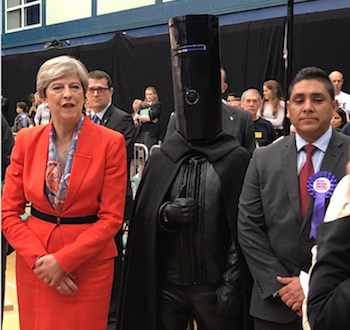 Theresa May’s political opponent commits to “free bikes for all”

Theresa May may have won a majority in her safe seat of Maidenhead, but her thunder was stolen last night by a cycling-friendly parliamentary candidate. No, not Jeremy Corbyn, Lord Buckethead. His fifteen manifesto commitments concluded with "free bikes for everyone." However, bike design guru Mike Burrows today told BikeBiz that such a policy was not welcome: "When you give away something for free it loses its value."

The leather-clad, pail-wearing "intergalactic space lord" received 249 votes in the Maidenhead seat, crushing the three votes for the Muppet character Elmo, but not toppling the "strong and stable/weak and wobbly" (pays your money, takes your choice) Theresa May.

In 1987 Lord Buckethead ran against then-Conservative Party leader Margaret Thatcher campaigning on a platform to demolish Birmingham to make way for a spaceport. His demands for this campaign included the "nationalisation of Adele," the "legalisation of the hunting of fox-hunters," and the "regeneration of Nicholson’s Shopping Centre, Maidenhead" (which, coincidentally, houses the Maidenhead Cycle Hub, a refurbished bikes charity).

But it’s his stance on public health that stands out for BikeBiz, and no doubt also for organisations such as Sustrans.

Commenting on the result of the general election, Sustrans CEO Xavier Brice said: “Our country faces a physical inactivity epidemic; an obesity crises; record congestion on our roads; and poor air quality. These issues could be vastly reduced and the economic vitality of our towns and cities improved by leadership and investment to help more families and communities walk and cycle short journeys.

Theresa May: “Hold my Pimms."

Brice continued: “We call on the next Government to recommit to increasing levels of walking and cycling through the Cycling and Walking Investment Strategy (CWIS) with proper funding and action. We need a rebalancing of road budgets to stop the marginalising of local transport and give people real choice in how they travel.

“Current plans up to 2020 see more than £1.1 million per mile being invested in maintaining national roads, which make up just 3% of all roads. This level of investment contrasts starkly with the £27,000 per mile investment available to maintain local roads that make up 97% of England’s road network.

“The new Government must also urgently improve the quality of the air that we breathe through an ambitious new Clean Air Act which tackles tailpipe emissions but encourages a real shift in how people travel to the least polluting of all – walking and cycling.

“This is not just about the next five years but the next 50 years, and the country next generations will live in.”

1. The abolition of the Lords (except me).

3. No third runway to be built at Heathrow: where we’re going we don’t need runways.

4. Ceefax to be brought back immediately, with The Oracle and other Teletext services to be rolled out by the next Parliament.

6. Buckethead on Brexit: a referendum should be held about whether there should be a second referendum.

7. Nuclear weapons: A firm public commitment to build the £100bn renewal of the Trident weapons system, followed by an equally firm private commitment not to build it. They’re secret submarines, no one will ever know. It’s a win win.

8. Nationalisation of Adele: in order to maximise the efficient use of UK resources, the time is right for great British assets to be brought into public ownership for the common good. This is to be achieved through capital spending.

9. A moratorium until 2022 on whether Birmingham should be converted into a star base.

10. Legalisation of the hunting of fox-hunters.

12. Katie Hopkins to be banished to the Phantom Zone.

14. Prospective MPs to live in the seat they wish to represent for at least five years before election, to improve local representation in Parliament.

15. Free bikes for everyone, to help combat obesity, traffic congestion and bike theft.

Share
Previous Nominations close today for BikeBiz 30 under 30!
Next Ultra-secure D-lock is named after the company cat