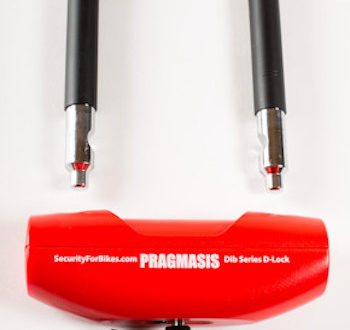 Ultra-secure D-lock is named after the company cat

In politics the "dead cat strategy" is an underhand tactic of introducing a sensationalist topic in order to distract. But in bike security it’s a way of remembering the company’s pet. At least that’s the case for Pragmasis of Tamworth, Staffordshire. Engineering director Stephen Briggs said the DIB-Series of ultra-secure D-locks were named for the company’s deceased pet.

"We were thinking of names for the new D-lock just around the time that our elderly ginger cat Willoughby passed away. He was one month short of being 22 years old. We often called him Willow, or sometimes Dibbleby, or Dib."

Briggs added: "We thought it would be nice to remember him by naming the locks after him: the Dibbleby D-lock, or just the Dib."

The DIB-Series compact D-locks are "far superior to the vast majority of D-locks on the market," said Briggs.

"These have a true 16mm-thick double-locking hardened steel shackle that is guaranteed impossible to bolt-crop by hand. These also have the same type of anti-pick disc-style cylinder inside as our SFB RoundLock."

The new locks are recommended for high-end bicycle security or similar applications, with the D-locks on their own and/or with the Protector 11mm/13mm/16mm chains.