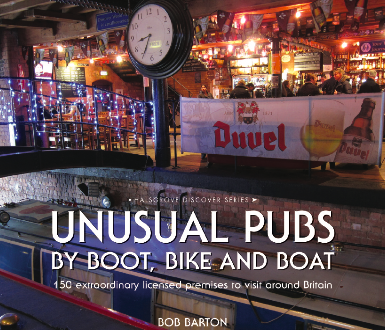 The biker’s book of pub pilgrimages hits the shelves

A recently-released book by passionate cyclist and lover of quirky pubs Robert Barton aims to direct its readers to some of Britain’s most cycle-centric establishments.

‘Unusual Pubs by Boot, Bike and Boat’, published by Halsgrove, features some 150 hostelries with a difference. Barton has scaled the length of the country scouting out locatons in both conventional and extremely unconventional places including caves, a chapel, a windmill, some that are not accessible by road and others lit exclusively by gas or candles.

It took Barton three years to research the project, often making a pub a destination for his leisure rides, using a Brompton or Specialized hybrid. He has included National Cycle Network details, canal tow-paths and long distance trails for relevant pubs, and tips on taking bikes by train. Those in London show the nearest docking stations for Boris bikes.

“It’s ideal for cyclists who want a destination to aim for, rather than just clock up the miles,” Barton told BikeBiz. “These are pubs for the curious, as well as thirsty. One of my favourites is the Turf Hotel at Exminster, Devon, marooned between canal and estuary. It’s impossible to reach by car but, for cyclists, the Exe Estuary Trail is a scenic gem.”

“The Scotch Piper in Lydiate, Merseyside, is thatched and built round an ancient oak tree. It’s just off the Trans Pennine Trail. They both welcome cyclists and don’t mind a bit of mud on your kit.”

Those looking for a cycling destination with a difference will be pleased to know that the book is available now from Waterstones and Amazon, and retails for £16.99.