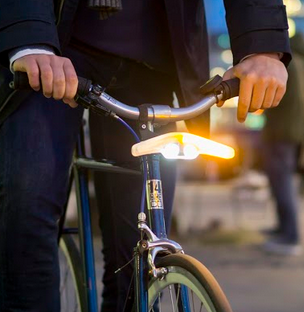 Blinkers are smart bike lights that indicate in the direction of the turn the cyclist is taking. The rear Blinker also has a red light that becomes more intense when the cyclist is braking, as well as a laser that projects half a circle on the ground to increase visibility at night.

Functionality is controlled by a wireless remote that is secured to the user’s handlebars.

The lights can be charged via USB and are designed to be used for around 20 hours. They can be put on any bike with universal attachments on the handlebar, the saddle and the rack. Blinkers can be removed from the bike via a magnetic system, so the user can remove them whenever the bike is locked. The system works with radiofrequency and a light on the remote control indicates when the Blinkers should be charged.

Blinkers underwent a round of crowd funding on the Kickstarter platform in June 2016 and accrued over 50,000 euros from 500 backers. After over a year of product development and negotiating with suppliers and manufacturers, Blinkers is finally hitting the market at the beginning of November 2017.