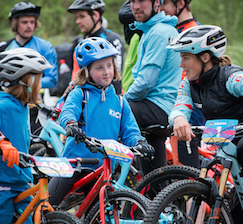 Tweedlove Bike Festival has announced that Shimano will be returning as the title sponsor of the 2017 event.

The influential cycling componentry brand will support all three rounds of the Triple Crown enduro series including the TweedLove International Enduro, which takes place from June 9th – 11th.

The enduro race will be the highlight of the three-day-long TweedLove on the Green bike expo, which will also include bike demos and talks.

Shimano will provide an array of demo bikes fitted with the latest equipment including the all-new Di2 mountain bike range and the E8000 Steps e-bike drivetrain. The bikes will be available for testing at the new Shimano event truck.

Madison clothing has also confirmed its continued support for 2017 and will bring a selection of branded clothing and gear to the event, including the recently announced TweedLove trail/ race shirts.

The full 2017 events programme will be announced in the New Year.