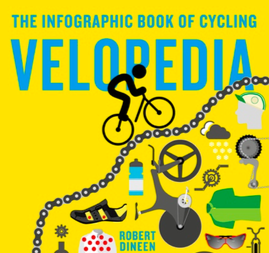 Robert Dineen, the author of Reg Harris: The rise and fall of Britain’s greatest cyclist and Kings of the Road: A journey into the heart of British cycling, has announced the release of his latest book titled Velopedia: The infographic book of cycling.

His latest effort is centered on detailed portraits of cycling icons, statistical breakdowns of the greatest road races and potted histories of its most enduring records, created in the form of simple-to-digest infographics.

Examining nearly all of the sport’s most intriguing stories, it also includes the most memorable rivalries, losers, most controversial stars and biggest scandals – including punch-ups and mid-race mishaps.

The hardback book will be available from Aurum Press from June 1st, 2017.