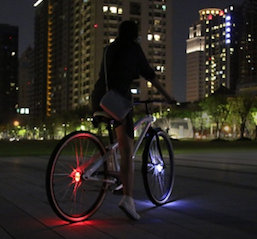 The lightweight 22 gram light attaches to both front and rear hubs via a rubber latch and are designed to increase 360-degree visibility in urban areas.

Powered by four super-bright LEDs, the Wheely light is comprised of a simple see-through IP4 waterproof plastic outer casing housing either red or blue bulbs. The unit is controlled via one button that controls three modes – blinking, constant and pulse.

Australian creator Jarrod Gibson commented: “We have developed our Wheely bike light, secured our manufacturing partners and component suppliers. Our production is ready to go; what we need is your help to reach our campaign target and initiate our first production. Your support allows us to create a high quality bike light and begin our production.”