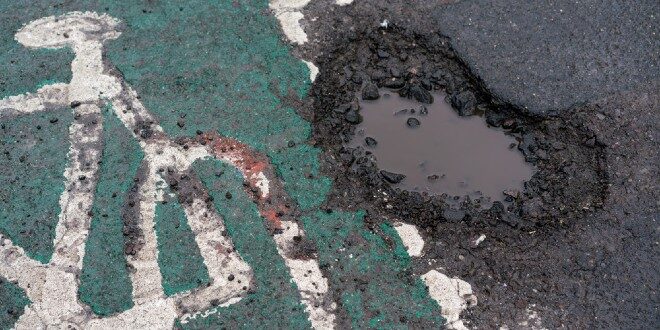 New Government statistics have shown that the conditions of roads in Manchester have improved since 2018 – but research by JMW Solicitors has revealed that the number of potholes reported in the city has increased in that time.

The road condition survey results show that the percentage of classified roads managed by local authorities that were in need of urgent maintenance in Manchester fell to 6.5% in 2021, which is level with last year’s figure, down from a high of 14% in 2018. Including all roads, the percentage fell from 19% in 2018 to 9% in 2021.

Nevertheless, the number of potholes reported in the city grew from 1,771 to 2,356 over the same period. Poorly maintained road surfaces, and potholes in particular, presented a heightened risk of accidents for vulnerable road users, with cyclists and motorcyclists often sustaining injuries due to potholes.

Nadia Kerr, partner and bicycle accident specialist at JMW Solicitors, said: “The Government wants more people to cycle as a healthy and environmentally friendly mode of transportation, but clearly, not enough is being done to keep cyclists safe on the roads. When more people took up cycling last year, the number of accidents involving cyclists also went up, even though there was less traffic on the roads.

“While road conditions would seem to have improved year on year based on the Government’s statistics, we know from our own research that the number of potholes reported has increased significantly. Too often, potholes cause serious and even life-changing injuries to cyclists and motorcyclists, but are not enough of a priority for the Government.

“If local authorities do not repair potholes and maintain all roads to an appropriate standard, and someone suffers an injury as a result of such a defect, they can make a claim for compensation. But local councils shouldn’t need the risk of having to pay compensation as an incentive – they should work hard to maintain roads and keep everyone safe.

“We also call on the Government to acknowledge the dangers of potholes and ensure that the road conditions statistics that are released each year better reflect this growing infrastructural problem. Consistent investment and better monitoring technology could help to ensure the safety of road users on all of our roads.”

In its report, the Government acknowledges that the technology used by local authorities to assess road conditions does not measure potholes, but insists that their presence will register as serious surface damage – it also suggests consulting independent research on the presence of potholes to learn more. However, this may mean that resources are not being targeted effectively to address the problem of potholes.