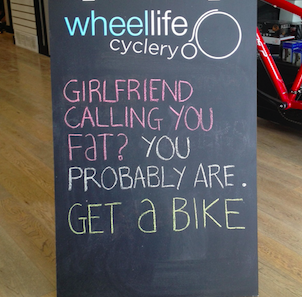 There’s no question that in the digital age, it’s hard to get your voice heard over the tumultuous onslaught of content that makes its way across the Facebook, Instagram and Twitter-sphere. Those of us who are hooked into the world of social media will know that not a minute goes by without a new funny picture doing the rounds or a video about a brand that’s doing something outside the box popping up – don’t even get me started on the virality of cat videos.

It can be infuriating, but when we analyse the thousands of shares, likes and clicks, it’s easy to see why brands spend large portions of their marketing budget on trying to catch that viral wave. It’s a powerful tool, but ultimately, a teenager in Hong Kong watching a video about a bike shop in Derbyshire isn’t going to translate into sales, so what will?

The content that succeeds online only conforms to one golden rule, it’s sole purpose is to grab the reader’s attention for a few seconds and either make them think, or laugh. Within that split second, the brand, individual or company has the user hooked and can then reel them in with exiting products or further content. As I’ve already said, this means little to nothing when being appreciated by someone on another continent, but apply the same rules to a high street and those few seconds in which you’re providing someone with a giggle or some fascinating information could very well lead to sales.

Granted, creativity is the key here. Whereas sharing a video would require a window-fixed screen – do-able at a push and eye-catching, but expensive and problematic; how many times have you laughed at a digital bus stop or a moving train station advert frozen on a windows desktop image and said “Whoops, someone hasn’t done their job very well!” – exactly.

Enter the humble sandwich board. Chances are you have an old board gathering dust in the shop basement or shoved in a cupboard after a Sunday night and forgotten about, well now is the time to retrieve it as it might just be your secret weapon. A whopping nine out of ten people we asked said a funny sandwich board was capable of grabbing their attention. Seven out of ten even said that if the joke, pun or design made them chuckle or think, they’d be likely to take a photo of it to show others. That is truly attention not to be sniffed at. What’s more, if updated regularly, your local community is going to remember to look out for that day/ week/ month’s entertaining message. It’s a dialogue starter, a sales tool and requires nothing but the cost of a pack of chalk and your imagination. Below are a few that made me laugh as simple inspiration.