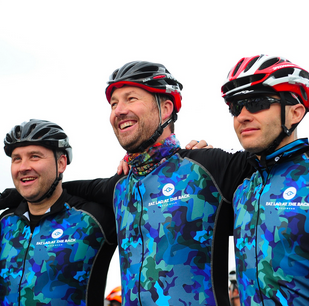 A group of cyclists are preparing to tackle the Coast-to-Coast ride on Saturday, June 24th, continuing their 2017 drive to raise funds for a brand new Leeds cancer centre.

Cycle wear brand Fat Lad At The Back confirmed that it will supply 42-year-old rider Robin Dow and his Ride4Cancer Team with kit ahead of the one day, 150 mile challenge from Seascale in Cumbria to Whitby in North Yorkshire.

Ride4Cancer has already raised £5,200 and counting for Maggie’s Yorkshire, who is fundraising to build a new Centre which will provide support to people with cancer, as well as their friends and families.

Fat Lad At The Back, which has been known to support similar causes in the past, has supplied Dow and his team with all-weather kit enabling them to complete training and participate in all five major fundraising challenges.

As well as the 15-mile Coast-to-Coast, the Ride4Cancer fundraisers – all of whom have been directly affected by cancer diagnoses in friends and family – will take on the 100-mile Ride London in July, having already conquered the Tour de Yorkshire, Fat Lad At The Back Sportive and the Yorkshire Struggle.

Last month Fat Lad At The Back provided Huddersfield Giants fundraisers with bespoke kit and en route support as they cycled from the John Smith’s Stadium to Newcastle for Magic Weekend on May 19th and 20th, raising funds for national brain injury charity Headway.

FLAB creative director Richard Bye commented: “It’s been a great effort so far by Robin and his friends – we’re delighted they have already raised thousands of pounds having completed three of their five challenges. But there’s still work to be done!

“FLAB is a community brand at heart – Robin’s drive to raise money for a new Maggie’s Centre in Leeds was something we automatically wanted to support. As a Yorkshire business ourselves with a passion for encouraging people to live active and enjoyable lives, providing the Ride4Cancer Team with kit was a no-brainer.”

Robin Dow of the Ride4Cancer Team added: “We are aiming to complete Saturday’s Coast-to-Coast ride in around 12 hours. I cannot thank Fat Lad At The Back enough for supporting us – we have two challenges remaining as we continue to raise money for Maggie’s Yorkshire.”

Robin Dow and the Ride4Cancer Team can be sponsored via a JustGiving page: https://www.justgiving.com/fundraising/Ride4Cancer2017