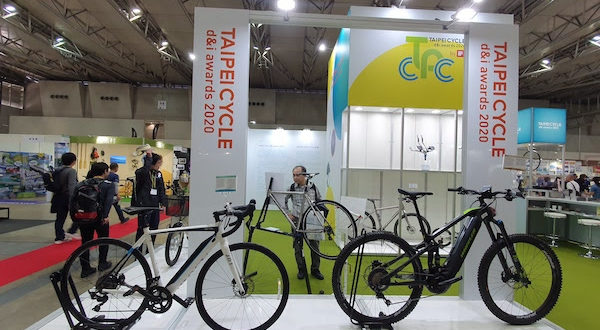 There is just one month left for companies to submit products to the d&i awards which will be held at the Taipei Cycle Show 2020.

The awards have been running for seven years, and all the products selected by an international panel of experts will be presented at the 2020 show.

Until the 16th December 2019, manufacturers and designers from the cycling industry are invited to enter their designs and innovations to be put to the test by the judges in the Taipei Cycle Show d&i awards 2020.

The benefits for winners include:
– Use of the awards logo
– Presence at the awards ceremony
– Space in a dedicated exhibition during the Taipei Cycle Show and online
– A suite of promotional materials

The Taipei Cycle Show team recently returned from Cycle Mode, the B2C event in Japan, which is an exhibition for road, cyclocross, mountain and e-bikes held over three days. Visitors enjoyed a dedicated test-ride course and a series of races for both road and off-road cycling.

Taipei Cycle Show held a conference just before Cycle Mode, where 60 companies and industry specialists attended, including numerous associations promoting local cycling tourism. Ken Takagi from Rising Publishing and Shinoby Miyauchi from an NPO, who focus on road facilities, were invited as speakers. Raymond Chen, director of TAITRA Tokyo Office, gave an overall picture of Taiwan’s bicycle industry as well as a brief history of the Taipei Cycle Show.

Takagi stated that e-bikes would remain a focus for the bicycle and parts manufacturers and pointed out that Taiwanese manufacturers could produce highly competitive e-bike related products. Andrea Wu, TAITRA senior project manager for Taipei Cycle, wrapped up the conference by giving an overview of Taipei Cycle Show 2020 and announced a new exhibition area called ‘Cycling Services’, which aims to help cyclists connect with smart technology.

Registration for trade visitors wishing to attend the show in March 2020 is now open. The event is set for a 17% increase in booths compared to the previous year, organisers have said.