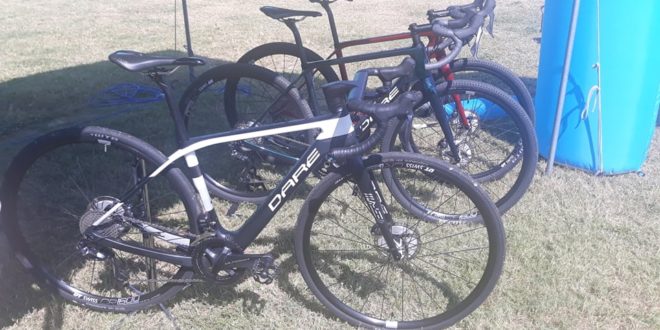 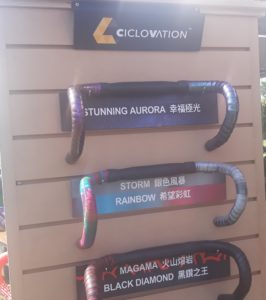 Among the products that it was showcasing was the Halo Touch Rainbow bar tape, which has a uniquely formulated synthetic Halo Touch surface with prismatic rainbow texture, “sure to turn heads while improving grip and providing all-out performance”.

Kind Shock (KS) said it continues to offer the widest variety of droppers available in 27.2mm diameter compared to any other manufacturer, with the LEV-Ci, the LEV, LEV-Integra, the LEV-Si, the e20i-i, the e10-i and e10 all currently available in 27.2mm. LEV-Ci 272, LEV 272 and LEV Integra 272 are updated with a new cartridge with “significantly more air volume for a more linear air spring feel”. Additionally, these models are now equipped with an air valve to adjust the main air spring pressure.

All LEV Series droppers come equipped with an all-new piston valve which “virtually eliminates the force felt at the remote due to the air spring”. KS added: “Now the only force felt is from the spring return from the cable and remote itself. This valve, called a Spool Valve, can be found on all LEV-Ci, LEV, LEV Integra and LEV-Si droppers of all diameters and travel.”

TRP was showing its Hall Lock,  a lever integrated into the derailleur mount, which locks the movement of the B-knuckle around the mounting bolt when closed. The Hall Lock can be opened to remove the rear wheel, and its tension can also be adjusted to better match a bike design or rider preference.

Prowheel was showing its Chain Snatcher, which is designed to solve the problem of dropped chains in 1x drivetrain systems. The mechanism only weighs 15g, it said. 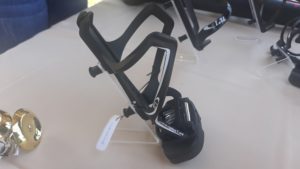 Nuvo, which celebrated its 50th-anniversary last week, had products including bottle cages, kickstands, bells and e-bike parts. RST had the Stitch 29, the Spex 20, the SS-A8 and the ELEV8 A2.

Dare Bikes was presenting the GRX, which is equipped with wide 700 x 45c tyres, as well as the adjustable V-CS system in its lengthened configuration.

“With a shorter reach and higher stack height in comparison to normal race bikes, GFX geometry allows the rider’s upper body to stay in a comfortable position for longer rides,” Dare Bikes said.

Taya, established in 1969 in Tainan, had the EL-ONZE-117, “the new milestone of chain”. It has three components – outer plate, inner plate and pin – a square type roller, oil container groove and sub pinch pin. A benefit, the brand said, is that it is 20% lighter than a normal chain. It is recommended for e-MTBs, e-racing bikes, racing bikes, gravel bikes and MTBs.