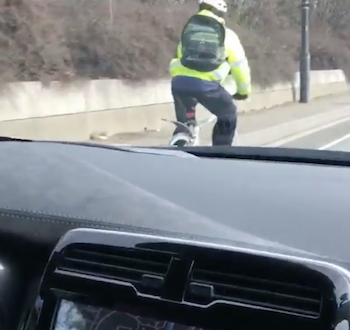 A French journalist has inadvertently captured video footage of a Nissan driverless car failing to give sufficient room when overtaking a cyclist. The video was shot in London earlier today. The console on the Nissan driverless car alerts the "driver" – Tetsuya Iijima of Nissan – that a cyclist is ahead on the Royal Albert Way dual carriageway in Newham, but the car does not move over into the empty overtaking lane, and nor does Iijima over-ride the car as it squeezes past the cyclist. (Iijima is Nissan’s global head of autonomous drive development.)

Rule 163 of the Highway Code states that motorists should give cyclists (and pedestrians and equestrians) as much space as they would give a motor vehicle when overtaking. This was demonstrated in a video fronted by British Cycling’s Chris Boardman. Last year, motorists who overtake cyclists too closely can “expect prosecution, not education,” said a strongly-worded statement from the West Midlands Police Traffic Unit. Other UK police forces now have similar "zero tolerance" to such disregard of Highway Code rule 163.

The "Nissan Intelligent Mobility" driverless car is a Nissan LEAF guided by five radars, four lasers and 12 cameras. It is currently being used to show journalists how Nissan’s "ProPILOT technology" can integrate with existing traffic. And as the video below shows, with the BBC’s transport correspondent, the answer is "not very well":

One of the French journalists in the car with the Nissan "driver" laughed nervously when the car skimmed the cyclist. "I was a little scared for him," he can be heard saying. ("J’ai un peu flippé pour lui quand même".)

Nissan CEO Carlos Ghosn is no fan of cyclists. Introducing a concept driverless car he told CBNC that the arrival of the technology could be delayed by pesky cyclists who, he said, "don’t respect any rules usually."

In January, Ghosn said: "From population growth, to the increase in elderly populations, to the stresses on transportation infrastructure, cities are facing challenges that could be solved, in part, by mobility solutions. To align technology, policy, and planning, automakers and cities must work as partners."

On Twitter, "SirWobbly" made the point that driverless technology can be quickly improved:

Car companies ought to be programming their driverless cars to adhere to driving codes, and in the UK such cars ought to overtake as suggested by Highway Code rule 163 – the car should have been in the other lane.

Tip: Thanks to Emmanuel.

Share
Previous “Read all about it!”
Next Raleigh social-history documentary screened by BBC