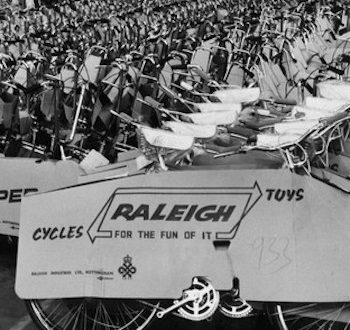 The BBC has screened a social-history documentary about Raleigh. "Pedalling Dreams: The Raleigh Story" aired on 15th March, and featured former Raleigh employees, racers and dealers, as well as tracing the history of the brand back to its beginnings in the 1890s.

The film was produced for the BBC by Bristol-based Testimony Films.

Assistant producer Emily Sivyer said: "It’s a beautifully illustrated story full of remarkable characters, epic adventures and memorable bikes. We meet the people who rode and raced them, the workers who built them and the dealers who sold them."

It’s not all rose-tinted stuff, the documentary also delves into what went wrong at Raleigh in the 1960s, before its revival in the 1970s thanks to the Shopper and the Chopper.

Some of the footage in the documentary was from this 17-minute educational film below from 1945 which was made in the Raleigh factory, although didn’t mention that fact.

However, much of the footage has not been seen before. The one-hour "Pedalling Dreams: The Raleigh Story" can now be seen on YouTube: