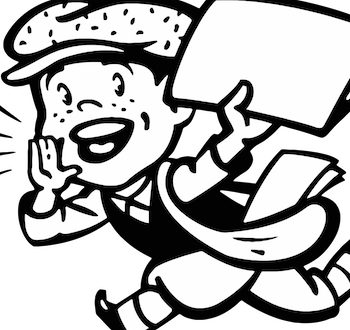 “Read all about it!”

BikeBiz.com was taken to task recently for publishing what was claimed to be “consumer-facing news.” The gripe was a story about a charity sportive. What’s a long-distance ride in an exotic locale got to do with the trade or industry, it was suggested. I countered, “plenty.”

Ostensibly, the fact that a charity is organising (yet another) sportive seems to be very much consumer focussed, but shouldn’t bike shops and suppliers of composite-framed sportive-specific bikes also get to hear about such events? Bottoms on bikes equals impacts on the bottom-line, after all.

Shop staff may not plan to do the sportive in question (and I’ll be giving it a miss, too – heck, I’m not even going to do the Fred Whitton this year, my first no-show in some years) but such events most definitely result in bike sales, and also generate sales of energy-powders and bars, and chamois-creams, arm warmers and more.

Thing is, in the internet age, what exactly is trade news? BikeBiz.com would be a stultifying read if all it contained were stories about the latest price lists, product launches and job switches. There are always going to be “trade” stories that are interesting to consumers, too.

Now, we could put the supposedly trade-only stories behind passwords (in fact, ten years ago we used to do this) but there are various problems with such a barrier, and there’s no getting away from the fact that attracting eye-balls is – and, in fact, always has been – the main point of having a daily news website.

There’s no second guessing what will interest consumers compared to, say, industry lifers. For instance, the BikeBiz exclusive on the merger between Chain Reaction and Wiggle was picked up by BBC.co.uk, the Financial Times and other heavy-hitters. It also went viral on forums and social media in general. The difference between a consumer story and a trade one is rather blurry and, in truth, always has been.

To hide away from prying eyes the Chiggle scoop would have been self-defeating – a consumer site or journalist with password-only access would have soon carried the story, citing BikeBiz but crediting us merely with that passion-killer: “behind paywall.”

BikeBiz.com is interested in cycling, not just sales of cycles. On the face of it, a story about a protected cycleway has little directly to do with the cycle trade, but if such a facility gets more people on bikes, that’s something that will affect bike shops at the coal face and brands further along the food chain, and that makes a cycle advocacy story into a trade one. Naturally, BikeBiz.com won’t take a purely consumer angle, we’ll always find trade slants, but in a multi-channel world there’s always going to be good reason to carry stories that some will not consider as old-school trade mag stories. In some ways, that’s what the mag is for – even the most eager of consumers will surely wilt if placed in front of an EPoS provider round-up (not just me, then).

Anyway, what’s a consumer? If a consumer is attracted to the site because of one of our bleeding-edge news stories, but ends up perusing the jobs section of the site and soon thereafter becomes a member of the trade they’re clearly no longer a consumer. And what a boring world it would be if our industry didn’t attract new blood. Grumps who gripe that a “consumer story” is “click-bait” are missing the point – we should all be reaching out beyond our ken.