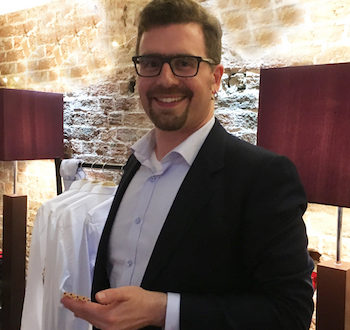 The shirts are made in Turkey, but that’s not the only Middle Eastern connection: Henderson is half-Iraqi, and tailoring is in his blood because his family owned the famous Hasso gentlemens’ outfitters in Baghdad. "This was my grandfather’s store," said Henderson. "It sold quintessentially English marques such as Church’s shoes. When Iraqis hear the name ‘Hasso’ they reminisce about the store and the ‘old days.’"

Hasso Fashion’s shirts are made with fine cotton but with a dash of elastane. A curved yoke and two-piece sleeves add to the shirt’s stretch characteristics. Mens’ and womens’ shirts are available. The shirt’s fabric is bespoke to Hasso, made only in small batches.

"I visited a lot of factories," said Henderson, talking about his decision to manufacture in Turkey. "This one was by far the best for the quality I wanted to achieve."

The cufflinks – available in gold-, rose-gold- and silver-plating – feature embedded gemstones, and retail for £55.

Henderson – a former health consultant – said he’s seeking both trade distribution and retailers for Hasso Fashion, which is based in Newcastle on Tyne.

"I could have started the brand with a Kickstarter campaign, but instead chose to use my own money to buy in plentiful stock so I can hit the ground running," he told BikeBiz