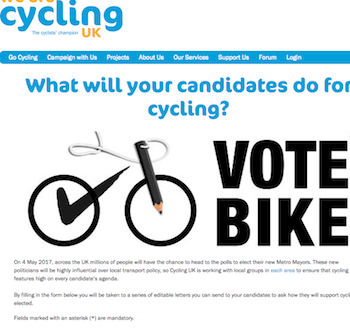 Cycling UK has launched a "vote bike" tool on its website to urge Metro Mayoral candidates to back cycling.

On May 4th, millions of people across England will have the opportunity to elect politicians to the new position of Metro Mayor. Elections are taking place in six key combined authority conurbations: Greater Manchester, the West Midlands, Liverpool City Region, the West of England, the Tees Valley, and Cambridgeshire & Peterborough.

Cycling UK has devised a set of local-specific asks with local campaign groups, to meet the differing roles and responsibilities of each Mayor. Common to all, will be the power to make strategic decisions over the whole combined authority region, with one key area of policy affected being transport.

The campaign is part of the charity’s "space for cycling" campaign, which was originally seed-funded by the industry’s Bike Hub levy.

Cycling UK president and newscaster Jon Snow has contacted each candidate with cycling asks and so far has heard back from five candidates across three of the regions.

Snow said: “For cycling, this is a major opportunity as it is these local political bodies that look after the bulk of Britain’s roads. To ensure this opportunity is properly utilised, we need local voices making noises – it is after all you they rely on to elect them.”

The asks vary by region:

Each candidate has also been asked to plan a region-wide network of safe Space for Cycling and actively to seek the funding to implement it.

“Creating full networks of space for cycling is essential if we are to see the step-change in cycle use needed to combat lethal air pollution and alleviate crippling congestion.

“The inadequacies of the UK Government’s cycling policy have left it to devolved authorities to deliver the national cycling revolution. It is imperative that we – together with local residents – work with all incoming Metro Mayors to create safer, friendlier and healthier communities through cycling.”