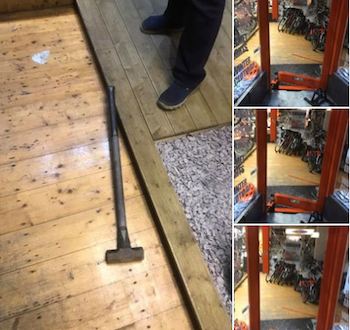 King Kog Cycles of Prestwich, Manchester, is offering a reward for information following an attack on the premises by sledgehammer-wielding thieves. The gang made off with five MTBs, not all of which belong to the bike shop. The smash-and-grab raid happened on Saturday night.

CCTV footage shared on the shop’s Facebook shows a gang of six masked men, one armed with a sledgehammer. A crowbar had been used to open the shop’s roller shutters.

The thieves stole three GT MTBs, a Saracen and a Fuel 8 Trek.