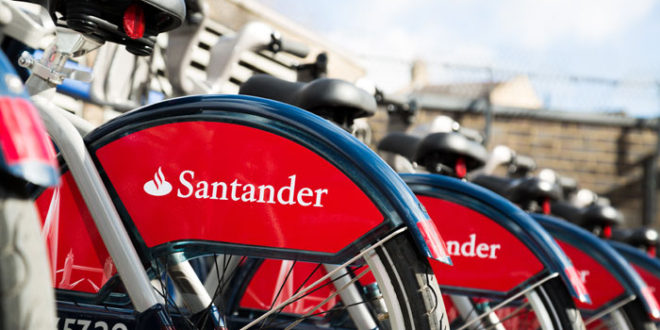 The station is at the Bonner Gate entrance and has space for 21 cycles. This is the first time that Santander Cycles will be available at the gates to the park and both TfL and Tower Hamlets are hoping that this new docking station will encourage people to explore the area by bike, in line with their ambition to increase the number of people cycling across London.

The new docking station opened on 1st August and was already one of the top-performing Santander Cycles locations over the weekend. From Victoria Park, Santander Cycles customers can easily access the Queen Elizabeth Olympic Park, which has nine docking stations, as well as the surrounding areas of Hackney, Hoxton, Haggerston, Shoreditch and Whitechapel.

Will Norman, London’s walking and cycling commissioner, said: “Santander Cycles are such a fun and easy way to get around London, and have contributed to our record cycling figures.

“I’m delighted that this new docking station will make it even more convenient to explore one of London’s most popular parks and beyond by bike. By enabling even more Londoners to cycle, we will also help clean up our toxic air.”

TfL recently consulted on plans for a new cycleway connecting Hackney to the Isle of Dogs, which includes a section through Victoria Park. Tower Hamlets is consulting residents on its draft transport strategy with the overall aim of increasing sustainable transport (walking, cycling and public transport) to 90% of all trips by 2041.

Councillor David Edgar, cabinet member for the environment, Tower Hamlets, said: “We’re delighted to welcome another Santander Cycles docking station to the borough and expand the opportunities for people to enjoy cycling.

“Victoria Park is one our 12 Green Flag award-winning green spaces and it’s great that more people will be able to stay active and travel using this popular service, which has more than 100 stations in Tower Hamlets. We want to encourage more walking and cycling to improve health and air quality, and make our neighbourhoods quieter, cleaner and safer.”

The Santander Cycles scheme continues to grow in popularity and there have been more than 83 million hires since the scheme was launched in 2010. Last year, a record 10.5 million journeys were made using the scheme. There are now 119 docking stations in Tower Hamlets alone.

David Eddington, head of cycle hire at TfL, said: “We know that many people use our bikes to cycle around parks and that there is demand for more bikes at these locations. Victoria Park is a perfect example of this and we’re pleased to be able to boost the number of bikes available to hire and dock around the park.

“We look forward to seeing even more people getting active and exploring this beautiful park on Santander Cycles.”

Cycle to Work Day takes place on 8th August. To encourage everyone to take part, TfL is offering free hires using code CTWD2019. This code gives a free 24 hour access period on the day and can be redeemed through the Santander Cycles app.

Last year saw the biggest increase in the amount of cycling in London since records began, with a daily average of 4 million kilometres cycled in 2018, which is 5% higher than in 2017.