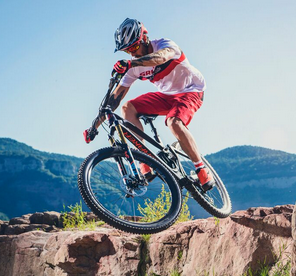 Mondraker’s flagship Foxy Carbon model has received an update for 2018.

For 2018 Foxy celebrates its 15th anniversary; for the milestone, the bike is being reinvented with more sophistication, more capabilities and better all-round handling.

The front triangle features a more stylized layout with thinner tubes, an upper tube with a flatter profile that brings greater speed and lightness whilst establishing a new stiffness standard, along with a new rear with an entirely renewed and structurally reinforced swingarm. It is the first model the brand offers in two manufacturing levels – Stealth Carbon and Stealth Air Carbon – the latter present in the exclusive RR SL version.

The Zero Suspension System has been fully optimized and its redesigned rear suspension offers superior performance. It is the first one introducing a metric sized shock with Trunnion mount.

Its more compact rear suspension features new 15 mm thru-axle pivots with larger bearings, being Enduro branded bearings for the RR SL model. Due to its new kinematics, the structural and technological upgrades introduced and its increased travel to 150mm, its overall absorption has improved exponentially.

The bikes’ forward geometry offers the possibility of adjusting the head angle in +/-1º and the chainstay length in +/- 10mm; both features directly inherited from the Summum Carbon and Dune Carbon. Forward Geometry is based on the same geometric standard of longer tubes combined with shorter stems of 30mm in length of the original concept Mondraker launched in 2013, progressing and being refined and perfected season after season.